Through a grant from the Association for Jewish Studies, University of Dayton English Prof. Miriamne Krummel will present staged readings of two 20th-century plays that dig deep into virulent medieval Jew hatred in England and Spain.

Beth Abraham Synagogue will be the venue for the reading of Sir Arnold Wesker’s Blood Libel on Feb. 6; Hyam Maccoby’s The Disputation will be presented on March 10 at the Downtown Dayton Metro Library. Krummel is directing both.

A member of AJS, Krummel is the author of two books about Jews in the medieval era and co-editor of an anthology about Jews in medieval England. Her third book, The Medieval Postcolonial Jew, is scheduled to be published later this year.

She says her aim with the staged readings is to introduce audiences to excellent plays, “two fantastic playwrights, and the power of the arts to express historical moments.”

Blood Libel
Jewish British playwright Arnold Wesker wrote Blood Libel in 1991 as a commission for the opening of the Norwich Playhouse in England.

Blood libel refers to insidious accusations against Jews that they ritually murder Christian children — sometimes mocking the crucifixion of Jesus — and use the blood as an ingredient in matzah for Passover.

Blood libels across Europe and in the Middle East have led to vicious persecution of Jews over the centuries; they continue even today.

In 2019, JTA reported that a professor at King Saud University in Saudi Arabia told an Egyptian public broadcaster that some Jews use blood to make matzahs for Passover.

A year later, JTA reported on an updated version of the blood libel in the United States: QAnon conspiracy theorists put forth false smears that “Democrats across the country are running a secret cabal to abduct and abuse children, harvest their blood, and defeat Donald Trump,” and that wealthy Jews George Soros and the Rothschild family are involved in “a cabal of Democratic pedophiles.”

The first-known blood libel, documented in Norwich, England in 1144, is the subject of Wesker’s play.

A Christian boy, William, is found murdered in the woods of Norwich. Blame is pinned on the Jews. Although the charges are dropped, 20 years later, a monk whips up fervor to have the boy declared a martyr of the church.

Prior to the staged reading, early music ensemble Wind in the Woods will perform instrumental works from the medieval period. University of Dayton Associate Prof. of History Bobbi Sutherland will give a brief talk about the play, with a Q&A to follow the production.

Members of the Jewish community performing in Blood Libel are Rabbi Melissa Crespy, Krummel, and this writer.

The Disputation
Hyam Maccoby, a Jewish British scholar and playwright, wrote his play The Disputation as an outgrowth of his 1984 scholarly publication, Judaism on Trial: Jewish Christian Disputations in the Middle Ages. In 1986, The Disputation was broadcast on Britain’s Channel 4 starring Christopher Lee.

The term disputation refers to theological debates that rabbis in medieval Europe were forced to engage in with members of the Christian clergy.

Rabbis were compelled to debate against the validity of Christianity. Consequences to losing the fixed disputations included death or banishment for the Jewish participant, violence against the Jewish community, censoring passages from the Talmud or burnings of the Talmud.

Maccoby’s play dramatizes the Disputation of Barcelona, July 20 to 24, 1263 in which Rabbi Moshe Ben Nachman was forced by King James I of Aragon to debate Dominican Friar Pablo Christiani (who had converted from Judaism to Christianity) on the subject of whether or not Jesus was the Messiah.

Wind in the Woods early music ensemble will also perform prior to The Disputation and University of Dayton History Lecturer Miguel Gomez will discuss the intricacies of the 1263 Barcelona Disputation. The staged reading will also conclude with a Q&A.

Along with Beth Abraham Synagogue and the Dayton Metro Library, the Jewish Federation of Greater Dayton is also a co-sponsor of the University of Dayton AJS Series.

Both staged readings are free and open to the public.

Krummel says she applied for the AJS grant for the readings because of her “particular affection for reading re-imaginings of the medieval past.”

She remembers her elation when she first read Sir Walter Scott’s Ivanhoe as a 20-year-old undergraduate at the University of Connecticut.

“I quickly fell in love with this novel and the character, Rebecca,” she says. “I watched the Elizabeth Taylor film and was further delighted. I was most excited because I discovered stories about Jews in the Middle Ages and because I met the figure of a strong Jewish woman in the medieval past.”

Over time, Krummel became familiar with the plays Blood Libel and The Disputation. When she told her husband, Matt Adkins — associate professor of European history at Columbus State Community College — about The Disputation, he started having students in his history classes act out the play.

“I did the same once,” she says. “My students really enjoyed the process of acting out a play.”

Krummel hopes the plays will bring audiences “to be more educated and more knowledgeable about Judaism, Jewishness, and the past in human history.”

The University of Dayton and the Association for Jewish Studies will present two staged play readings:

Both programs are free and open to the community. Masks are required.

The Jews of Easy Company 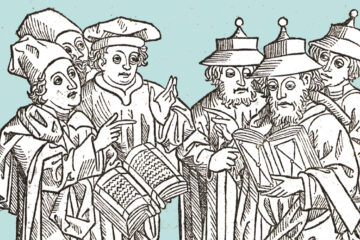 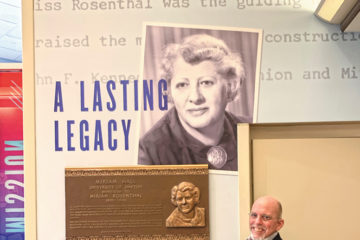