History of flags in sanctuaries

Though historians don’t have a clear picture of when American Jews first began placing U.S. flags in their sanctuaries, it appears Old Glory’s widespread display in American culture is linked to the assassination of President Abraham Lincoln in 1865.

He also sits on the national advisory committee of the congressionally-recognized Abraham Lincoln Bicentennial Commission, which will honor the 200th birthday of the 16th president in 2009.

“During Lincoln’s multi-state funeral, flags were elaborately used,” Zola said. “We definitely know that Jews began to introduce flags: when rabbis spoke about the assassination, flags were brought into the sanctuary. It was an attempt to unify the nation after the Civil War. During the mourning period, sanctuaries were bedecked with American flags. Ahavat Chesed in New York did so.”

Zola said that when U.S. synagogues began commemorating their 50th anniversaries in the 1880s and ‘90s, they also adorned their sanctuaries with flags. “I have found three that threw flags all over.”

He said he can’t pinpoint exactly when the U.S. flag started to be displayed permanently on the bima — the area of the synagogue where the Torah is read.

“I haven’t been able to locate any documents,” he said. “My hunch is that it was just in the aftermath of World War I, the patriotism after 1917. Lots of Jews were doughboys in the military.”

By the 1930s, Zola said, a U.S. flag on the bima was an established tradition in U.S. synagogues.

He also noted that many Christian denominations decided “long ago never to have American flags in the sanctuary.” The message, he said, is that God is supreme, not the state.

Based on his research, Zola said it appears that Jews and other minorities were more likely to put flags in their worship spaces than religions in the majority, to demonstrate their loyalty as minority citizens.

“In the last decade has emerged this removal of flags,” he said. “Several congregations have done this. Mt. Zion in St. Paul took them from the bima and they are now in the lobby.”

However, he adds, “it is fair to say the American and Israeli flags inside the sanctuary is the common practice today.”

Dr. Jonathan Sarna — Braun Professor of American Jewish History at Brandeis University and director of its Hornstein Jewish Professional Leadership Program — said that as far as he knew, U.S. flags sprouted in churches and synagogues during the Spanish American War (1898).

“There was a burst of ‘faith-based’ patriotism at that time,” he said. “Each successive war has renewed this spirit of patriotism which was likewise renewed by 9/11. Then, when antiwar sentiments rise, as in Vietnam and now, opposition to flags mounts.” 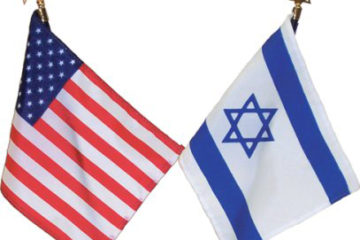