She sits in her wheelchair at the kitchen table of her grandparents’ home in Miamisburg.

“She was born prematurely, 3 lbs. at birth,” Elizabeth begins. “We started to notice that she wasn’t able to hold up her head or roll over or anything when she was a baby. And the doctor kept telling us she was premature, she’ll catch up.”

Frank adds, “He just wrote us off that we were over-concerned parents: basically we had no reason to be worried, she was premature.”

But the Van Skoycks knew something was wrong. A physical therapist referred Brooklyn to the Cleveland Clinic.

“Her head was starting to get misshapen and they had to do a CT scan before they could fit her with a shaping helmet,” Elizabeth says.”

The CT scan confirmed there was a problem with Brooklyn’s brain.

Following five months of testing through the Cleveland Clinic, when Brooklyn was 10 months old, the Van Skoycks learned that their daughter had Canavan disease.

‘We hadn’t heard of it before’

Canavan is a debilitating neurological disorder in which the brain deteriorates because of a defective inherited gene.

Children born with Canavan rarely if ever survive their first decade. They become blind, paralyzed and prone to seizures. There is no cure.

Elizabeth says her reaction was “devastation.”

“We thought for sure they were going to tell us she had CP,” she says. “We hadn’t heard of it before.”

A rare disease, Canavan is more commonly found in people of Ashkenazi (Eastern European) Jewish descent. One in 40 Ashkenazi Jews is a carrier for Canavan. One in 5,000 Jews is born with Canavan.

But Canavan — and the other genetic disorders more commonly seen in and associated with Ashkenazi Jews — is also found in the general population, albeit at an microscopically small rate.

Elizabeth’s father, Al Friedman, is Jewish; her mother, Rosetta, is not.

Frank’s ancestry is Dutch and German.

When they received Brooklyn’s diagnosis, Elizabeth was pregnant with their second child.

They went for genetic testing through Miami Valley Hospital and found that Elizabeth carried an Ashkenazi mutation of Canavan and Frank carried a non-Jewish mutation.

To their relief, they also learned that their unborn child was not a carrier.

If both parents carry a Canavan mutation, the chances of their child having the disease are one in four.

‘Not exclusive among Ashkenazi Jews’

“One is essentially trained to look for it (Canavan) among Ashkenazi Jews,” Friedman says. “To be honest, when I saw the original name, Van Skoyck, it wasn’t top of my list. But we know that these disorders are certainly not exclusive among Ashkenazi Jews.”

Once they received Brooklyn’s diagnosis, Elizabeth and Frank changed pediatricians. But their second pediatrician, part of a teaching clinic, treated Brooklyn like a guinea pig.

Elizabeth and Frank then turned to Dr. Gregory Eberhardt in Springboro as their third pediatrician. They’ve been with him for two years.

“He’s great,” Elizabeth says. “He takes his time, he makes sure if we have any questions, he’ll look them up on the computer.”

Eberhardt says that Canavan is so rarely seen in this part of the country, it would be easy for doctors to misdiagnose or overlook.

“Early on, it’s going to be, at least in many cases, kind of vague symptoms that aren’t that specific, so unless you take a broad look at things, you may not find it,” he says. “I could see how they went through that frustrating process.”

Though Eberhardt says he saw a patient with Canavan during his residency, Brooklyn is the first patient in his practice with Canavan. And there is a learning curve.

“It definitely required some refreshment that honestly they (the parents) provided a lot of.”

Eberhardt says he also relied on Dr. Marvin Miller, head of the Department of Medical Genetics at Dayton Children’s Medical Center, and affiliated professor in the Department of Biomedical, Industrial and Human Factors Engineering at Wright State University.

“Even though we think of Canavan’s disease as not existing in the non-Ashkenazi Jewish population, it certainly can,” says Miller. “It’s just that the likelihood of that happening is much, much less likely.”

Miller says he sees very little Jewish genetic disease in Dayton. “If you are in New York City it’s prevalent,” he says. “But here, it’s much less so.”

Elizabeth knows of only one other child in Ohio diagnosed with Canavan. Friedman has no other patients with the disease currently. Miller recalls one child from the Dayton area with Canavan about a decade ago.

In the Van Skoyck’s small two-bedroom apartment next to her parent’s home, Elizabeth cares for both children. Frank works two jobs to make ends meet. Nights are busy. Brooklyn wakes up frequently with leg cramps.

“We can’t have her in the bedroom with Xander because it will keep him up all night,” Elizabeth says. “So she sleeps in our bed, because there’s no room in our bedroom for a hospital crib.”

A Miamisburg School District physical therapist comes out once a week for itinerant services through its preschool program.

Brooklyn goes for physical therapy twice a week, occupational and speech therapy once a week.

“She’ll be 5 in December and is doing fantastic,” Elizabeth says. “She understands a lot. She can’t tell you back, but she answers some questions yes or no: she shakes her head.”

Brooklyn is even learning to walk a little bit. She now has a walker.

“They’ve been trying for probably two years and she’s just gotten where she’s strong enough to push it,” Elizabeth says.

The walker is too big to fit through the doorways of the apartment or even her grandparents’ house. The physical therapists suggest Elizabeth and Frank take Brooklyn to a mall to use it.

“And we just ordered her a talking device too,” Elizabeth says. “They did an evaluation and she’s able to pick the pictures she wants, to tell you what she wants to do.”

The touch-screen computer device — used for those with CP, autism, hearing and speech problems — will help Brooklyn communicate her wants and needs.

“That, as far as I know, is unheard of for any of these Canavan kids,” Elizabeth says.

“What I have seen more in her generally is not a progression over these two years,” Eberhardt says. “I think she’s not regressed significantly, but in that period of time from 15 months to 31/2, most kids have an explosion of development — speaking and running and climbing — and she has just kind of plateaued. She’s a happy kid.”

“Definitely have genetic testing,” Elizabeth urges. “If you know you have Jewish background, it’s very smart to get tested. You want your family to know. It’s a simple blood test.”

Friedman says he would have the Jewish partner go first, to be screened for genetic disorders most commonly found in Ashkenazi Jews.

“I think when risks run high within a population as it does with certain things in the Ashkenazi Jews, that potentially awareness and screening for it early on would be appropriate,” Friedman says. “If they don’t carry it (the most frequent Ashkenazi Canavan mutation), it doesn’t eliminate the risk because there’s a very small risk they could be carrying the other gene (a less frequent Ashkenazi Canavan mutation). But I think you reduce the risk significantly. And if they (Ashkenazi Jewish partners) do have it, then I think the other partner should be tested, just so that there’s an awareness.”

“I would screen the Jewish partner first,” Miller agrees. “The reason is that you know what the common mutations are and it’s relatively inexpensive. In order to screen the non-Ashkenazi Jewish partner, that panel of mutations is not going to be relevant. You really need to sequence the whole gene,” which Miller says may cost $1,500-$2,000.

“Now, if you did the 10 or 12 tests that are offered to an Ashkenazi Jewish individual, and the Ashkenazi Jewish potential parent all turned out negative for all of them, you would stop there,” he says.

“Let’s say for Tay-Sachs it turned out positive, you might consider offering to the family having the non-Ashkenazi Jewish partner tested just for that one. That might be an approach.”

Miller offers a caveat: genetic testing isn’t foolproof. If one carries a disease’s mutation that isn’t common, testing can miss it. Testing, he says, “significantly decreases the risk, but it’s important to recognize it doesn’t take it down to zero.”

Brooklyn had a check-up at the Cleveland Clinic on May 9.

Elizabeth Van Skoyck says an excellent resource to her family is the National Tay-Sachs & Allied Diseases Association. “It’s a great place to go for information,” she says, “fantastic people. They send out newsletters, they’ll give you a calling card so if you want to talk to another family, you can. If we have questions, they have a message board and we communicate that way.”

The Canavan Foundation is a not-for-profit organization that aims to help prevent Canavan disease through education and testing and to support research efforts, which have yet to find an effective therapy. It is also a clearing house for information about genetic testing and about other Jewish genetic diseases for which there is carrier testing.

When it became known to Jewish Federation Executive Vice President Larry Skolnick that the Van Skoycks were in need of a van to transport Brooklyn, an anonymous angel from the Jewish community made it happen.

On May 19, a 2005 Dodge Caravan SE minivan, fully converted with a wheelchair lift, was delivered to the Van Skoyck apartment. Until then, the Van Skoycks had one vehicle, a two-door Chevrolet Cavalier.

“She was getting too big for the car,” Elizabeth says. “Her legs don’t bend properly, she’s very stiff in her legs, so her feet were pressed up against the backs of the seat. And it was tearing up her wheelchair because these aren’t meant to be put together and taken apart two or three times a day. We’ve already had it serviced twice and we haven’t had it a full year. And it has to last five years before they’ll give her a new one because of our insurance.”

On behalf of the anonymous donor, Federation’s Deb Childress worked with Irv Moscowitz of Burhill Leasing to identify the best vehicle for the Van Skoycks and to fit it with a wheelchair lift.

“There are not enough words to express our gratitude,” Frank says. “This is a wish come true.”

“It’s really going to change Brooklyn’s life and make it a lot easier for her to get to and from therapy and get around,” Elizabeth says. 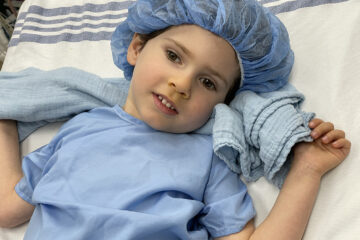