Victims of antisemitic or extremist hate or harassment in Ohio now have another avenue for recourse, thanks to the Anti-Defamation League’s regional office in Cleveland.

The launch of the Ohio Legal Assistance Project allows victims to use attorneys on a pro bono basis to seek civil litigation.

“We view it as our job to ensure that hate and bias does not go unchecked,” James Pasch, regional director of ADL said. His office services all of Ohio, West Virginia, Kentucky, and western Pennsylvania. “Victims have the ability to make themselves whole after their experiences either on or offline, and they should have the right to pursue civil remedies.

“On top of that, it’s also crucial to send a message to the perpetrators of the hate crimes that their actions will not be tolerated and that the full extent of the law will be used.”

The project was launched July 27 and was created through a collaboration between the Cleveland and ADL national offices.

“When it comes to potentially expanding out, our hope is to provide support to victims of hate crimes of extremism across the nation,” Pasch said. “We’re starting here in Ohio and we will see how things go. This is a first-of-its-kind ADL pilot, right here in Ohio.”

Pasch said Ohio was chosen because of a more than 150 percent rise in antisemitic incidents of assault, vandalism, and harassment across the state; 53 percent of American adults now report experiencing some form of online harassment.

“There just comes a time when it’s incumbent upon all of us to take a step back and say, ‘What else can we do to help the victims of antisemitic acts, extremist attacks such as swatting and vandalism, and victims of assault for who they are?’ This is a tool that can be incredibly useful,” Pasch said. Swatting is reporting a false emergency at the home of a victim to prompt a law enforcement response, usually a SWAT team, to the residence.

Criminal courts are important, he said, though civil courts not only provide for monetary settlement, but help in other ways.

“If there’s a specific target of a vandalism or a specific target of a physical assault, that police report generates a criminal investigation and then hopefully in many cases, a criminal indictment and a criminal conviction, but victims of those crimes also have a right to bring a civil remedy,” Pasch said. “Victims often don’t bring civil cases either because they are unaware of their ability to do so, or they’re not inclined to have to first go out and hire an attorney, so the idea we are providing an opportunity for them to pursue their claims by matching them with an attorney on a pro bono basis is significant. It’s at no cost to the individual.

“Civil remedies have the ability to try — you can never make a victim whole necessarily because you can never undue the hate crime that occurred. But a civil remedy has the ability to provide some form of justice, and maybe at times, some form of deterrent. Many civil cases are not settled at trial, but they’re settled outside of a courtroom. And when you have that ability, it also allows for things like mandatory education and community service, and all of those things that can be worked into any type of settlement agreement. There’s the monetary part of settling agreements, but there’s also the non-monetary that could come into play.”

Victims can include individuals, family members, businesses or organizations that have experienced harm.

Cases the ADL may take on are antisemitic vandalism, extremist-motivated violence, severe and pervasive harassment or stalking on or offline, swatting, civil rights violations, defamation, and/or privacy violations.

Ohio residents interested in learning more about the program can visit cleveland.adl.org.

Chabad at Miami U. readies to open new home 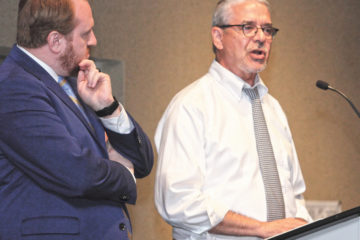