By Masha Kisel, Special To The Dayton Jewish Observer

In the late 1980s and early ‘90s, American Jewish communities went out of their way to welcome refugees from the former Soviet Union.

They opened their hearts and homes to grateful, meekly smiling families. There was a lot of nodding and pointing and patting each other on the back in what looked more like a reunion of long-lost friends than a first-time meeting.

But what if the people who arrive to your generous Shabbat dinners and Passover Seders are alien, prickly and unlovable?

The charity we received when we first arrived sustained us physically, but we were not able to show appreciation for it. Not right then. For one, we didn’t know how to smile.

It literally hurt our faces, much like the contortions we had to perform to pronounce “sheet” and “peace.”

The results often weren’t pretty. Smiling was an instinctive expression of joy. But we were not a happy or a close family.

Immigration only amplified our dysfunction and we did not smile often. My stepfather and I were enemies, locked in combat for my mother’s love.

And although he was the more powerful Goliath, I knew that I could outlast him. I did.

Back in Ukraine, I could not adjust to my new stepfather and begged to go live with my Grandma. I lived with her for two years. When we left for America, my grandmother stayed behind and my mother, stepfather, and I remained in tug-of-war formation.

Our first American home together was a two-bedroom apartment in Chicago’s East Rogers Park. Although I did not learn this until many years later, the rented apartment eventually turned into a gift of inconceivable generosity.

When our elderly Jewish-American landlords decided to retire in Israel, they sold us the furnished two-bedroom for a few thousand dollars. I don’t know their names and I doubt that they are still alive. I want to say thank you, if only symbolically, because now I understand what they did for us.

They saved us from possible homelessness when my Mom got too sick to work, and my stepfather was too pathologically contemptuous to have a boss.

We changed nothing in the apartment. Home renovation was a foreign concept. Having only lived in government-owned housing, then wandering from one temporary home to another during our HIAS-sponsored journey through Italy and Austria, we learned to adapt and grow quickly attached to new surroundings.

The Chicago apartment very quickly became “ours.” To repaint the bright teal walls or to remove the scratched painting of the young girl picking grapes would be an act of self-harm. A collection of familiar things was protection, warmth. It eased the trembling we felt at the chill of so much newness.

In our first spring in the U.S., in 1989, the family of a Solomon Schechter classmate invited us to a Passover Seder. His older brother, home from college, kindly picked us up (we didn’t yet own a car) and drove us to their home in the north suburbs of Chicago. As we pulled up to the gates of a mansion, I nervously tugged at my hand-me-down sweater and prayed that I wasn’t wearing one of their donations.

My classmate’s father, who I later learned was a prominent architect and whose house was far from typical, warmly greeted us.

This was my first visit to an American’s home, so I assumed that all my classmates had indoor pools, greenhouses, bowling alleys, arcade machines and empty palatial rooms with no obvious purpose.

That mansion broke my heart. It wasn’t jealousy; I couldn’t imagine living there. It was the realization that I would never be able to invite any of the American kids over.

I saw our formerly cozy apartment through new eyes. I scowled at the water stains on the bathroom ceiling, which resembled a hideous insect permanently threatening to fall on my head.

Everything looked weird, ugly, menacing. The teal walls were tacky. The paint was cracked.

How would I ever make American friends? If I invited them here, they would be horrified, repulsed. I imagined the most popular girls from my class cowering in the corner of our teal dining room like hostages, begging their parents to come pick them up as soon as possible.

The architect firmly shook my stepfather’s hand. “Thank you. Thank you for joining us.”

My mother handed our host a box of Russell Stover chocolates from the Dollar Store.

“This will be a wonderful addition to our dessert table,” he said graciously of the corn-syrup filled candies that would be thrown out.

We were led through the glass-domed greenhouse where guests clustered on couches. In another room, immaculate and beige, more people we didn’t know stood and sat in groups.

There seemed to be no central gathering place in these giant rooms, just an oceanic expanse of elegance as far as the eye could see.

“Just make yourselves at home.” My poor Mom and stepfather did not know where to anchor themselves. Which room should they be in? Should they stand or sit?

I was ushered into the arcade where I pretended to push buttons hoping no one noticed that I didn’t know how to play. When I finally found my mother and stepfather again, they were in a corner petting a white cat with laser-like concentration. The cat arched its back, unaware that it had rescued two castaways.

When it was finally time for dinner, 50-some guests, smartly dressed in olive and khaki, sat down at long tables. It was hard to figure out who was part of this family (could any family really be so big?), who was a friend, and who was hired help.

Perched uncertainly at the edge of a bench, trying not to take up too much room, we followed along in our Hagaddot not daring to speak to one another, lest we give away our bluff about being able to read Hebrew.

We followed their lead and dipped our fingers to mark the plagues and I saw my stepfather dutifully consume four cups of wine, even though he rarely drank at home.

After the matzah ball soup, we heard a distant clinking of silverware on glass and I heard the disembodied voice of a man I couldn’t see. Was it my classmate’s father? Was it an uncle? Was it someone they hired to give speeches?

He boomed majestically from above. He must have had a microphone: “Today we would like to welcome a family who has been oppressed by the Soviet regime and unable to practice their faith.

They are here with us today, free to be Jewish and to live out their Jewish values!” 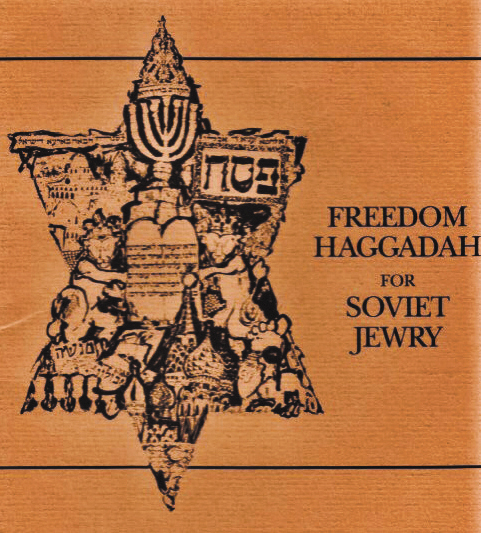 He didn’t know our names. All eyes turned to us and after a brief silence, I heard scattered clapping.

These nice, wealthy people in neutral colors thought that we were a family, an oppressed family with Jewish values!

Sure, I knew that my grandmother couldn’t become a journalist in the Soviet Union because she was Jewish, I knew that my Mom was told that she had a “Yid mug,” I had heard the joke that “they punch you in the face, not in the passport” about those with a non-Jewish parent who chose to put “Russian” or “Ukrainian” down in their documents to bypass the Jewish quota and get into college.

I even knew that my great-great- grandfather was a rabbi who died after a Cossack-led pogrom. He attempted to defend his daughter’s honor but died a few days later from injuries to his lungs and kidneys. Her honor wasn’t defended. I knew her as the great-aunt who never spoke again.

But that was then. There was no trace of that rabbinical lineage in our current lives. We adapted to the Soviet regime and tried not to make waves. Now we were trying to survive under new rules.

I didn’t know whether we had values, much less Jewish values or what they were. We were on a lower rung of Maslow’s hierarchy than the toastmaster imagined. My parents’ days were filled with figuring out how to use food stamps, where to buy what, how to understand “phone English,” which was spoken much faster and with fewer context clues than “in-person English.”

Whatever memories of oppression we had were dead and buried, at least for now, under layers of petty urgency.

After the toast, a man who had introduced himself as a rabbi earlier, turned to us with interest.

“I khav kvestion for you, rebbe,” my stepfather began in his halting English, clearly a little drunk. My heart sped up. “You khav cheeken. Eet haz moostash and eet sings in cage. Ees eet kosher?”

The rabbi blinked, clearly confused. “I am sorry, are you asking about a certain breed of chicken?”

I was terrified that the rabbi would seek counsel from another theological expert at the table and “the chicken with a moustache in a cage” question would be passed around.

How could he not see that my stepfather was making fun of him? That he was making fun of Judaism? Perhaps the rabbi assumed that there was a language or a cultural barrier, or worse, he understood and was being kind by feigning ignorance. 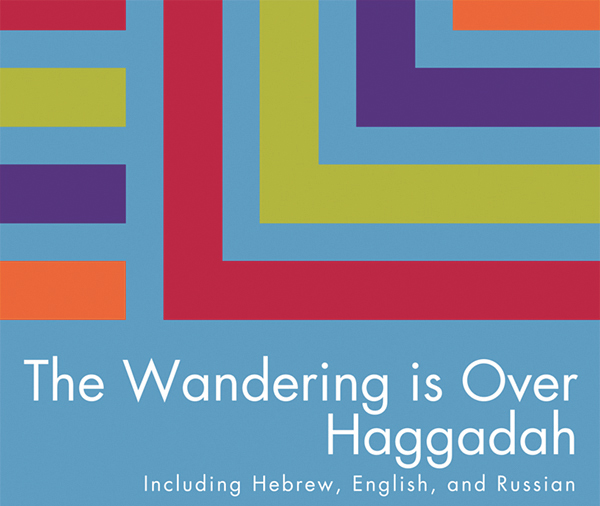 With each polite attempt to comprehend my stepfather’s question, the situation became more unbearable until my mother, flushed with embarrassment finally said, “Zey don’t have zis cheeken in Amerika.” Potato kugel was served and the conversation ended.

My stepfather was a mean-spirited man, but for once his meanness was not directed at me. And even though I saw that it was wrong to be so ungrateful, his joke made me feel less like a charity case.

The chasm between us and them wasn’t just socioeconomic. We were unsettled, blinking in and out of existence with nothing of our own. They were many and we were few. They were harmoniously joined together and we were at each other’s throats.

This brazen ingratitude was an assertion of selfhood. Maybe we were something terrible, low and slithering, or maybe we were just tired and poor. But we were already something.

Despite my mortification, for the first time, I felt something resembling familial attachment toward my stepfather. It wasn’t exactly love, but a kind of solidarity.

They put their arms around us as we sang Dayeinu after dinner. It was genuine affection for the stranger. It was golden-hearted kindness that made our benefactors feel so good. They were performing a mitzvah and I stiffly swayed to the music, crushed by the weight of their embrace and waiting for it to be over.

Today, my husband and I are in the position to welcome newly-arrived immigrants to our home for Passover. I have to remind myself that true hospitality is acceptance, but not only of benign differences, like language and traditions. It might also mean accepting broken families and broken people at their worst moments into your home. Strangers come with baggage. Do you have room at the table?