By Sam Lauber
Special To The Dayton Jewish Observer

By 1940 the Nazis occupied Belgium. Jewish families and their children were at risk of execution or deportation to concentration camps. Jews were stripped of all their basic human rights and were forbidden to live or remain in their homes.

They were stripped of their Belgian citizenship. The Nazis required that all Jewish adults wear yellow stars with the word Juif (Jew), displayed on clothing for easy identification.

They would round up Jews in their homes or on the street and would instantly haul them off for deportation to concentration camps, labor camps or execute them on the spot. This was Hitler’s plan and final solution: to annihilate all Jews in Europe.

Terrified, Jewish parents were faced with a dilemma: how can we save our children? Knowing that they were at risk, their number one thought was to make whatever arrangements necessary – whatever the cost – to keep their children alive.

Although there were no records kept, estimates reveal that between 10,000 and 100,000 Jewish children were hidden during the Holocaust.

That was my fate. I was born in Antwerp, Belgium in 1942 and can only recall that I lived with my parents on Rue Gustav Fils in Brussels.

I only knew French as a child even though I was born in Antwerp where the inhabitants spoke Flemish. My sister Jenny, 16 years older than me, lived with her husband in Brussels.

Through arrangements with Belgian nuns and the church, I was escorted by my sister to the Detry family in Lalouviere, Belgium.

My parents were extremely upset considering what the future would bring for them and for me. In their mind were thoughts such as, “Will we ever see our son again?” “Will he be safe?” “How long will he be gone?” “Will he have to convert to Christianity and attend church services?” They cried.

Although I was about 3 when delivered by my sister to Lalouviere, my thoughts were, “Why am I going to Lalouviere and the Detrys?” “Am I being punished?” “Did I do something wrong?” “Will I ever see my parents again?” “Who are these people that I will be staying with?” “I don’t want to go!” I cried.

Since I was so young it was difficult for my parents and sister to explain the circumstances to me. I had no idea about the Nazi occupation let alone who they were. All I knew was that I was torn away from my parents and I did not understand.

The Detrys had a son by the name of Jean Marie who was my age. We soon bonded and became brothers. I had a brother who cared for me. We went everywhere: shopping, school, church, and played together in the backyard. It’s possible that I was even baptized.

I had no feelings about the Detrys. My mind was preoccupied about going home and I cried a lot. I missed my parents terribly and wanted to go back home right away.

I never inquired about the first names of Jean Marie’s parents. I did not know that I was Jewish or came from a Jewish family. I went along with the family and was known to all others as “Dede,” their son.

While Lalouviere was strictly gentile, I don’t believe that Nazi troops ever came there. I believe that the Detrys kept my secret within the family. Had they been identified, they would have been at risk for deportation. My secret was likely kept within the immediate family and perhaps with very close friends.

While in hiding I often reflected and vividly recalled what my parents looked like. I missed them terribly.

A year later my sister picked me up and brought me back my parents.

My parents never discussed the war, my separation from them, or what they did to survive the war.

All I know was that after six years in Belgium, in 1948, my parents were discussing immigrating to the United States.

My mothers’ parents and a sister lived in New York City; two other sisters and their families lived in Detroit. My father had extended family in New York as well.

They knew they could not remain in Belgium, having lost all of their personal goods. To them the United States was a new land of opportunity and religious freedom – to grow and learn – if not for them, for me.

In 1948, we sailed on the Queen Elizabeth from Cherbourg, France to New York. The trip across the Atlantic took one week. On board were many refugees who had similar dreams of starting anew in America.

While on board, my father took me to the ship’s synagogue for Shabbat services. We ate in a designated cafeteria and saw movies daily. My parents were both seasick and suffered during the entire trip until we landed in New York and saw the Statue of Liberty.

This was our newfound freedom and home. We processed through the Hebrew Immigrant Aid Society (HIAS) at Ellis Island and soon set up in a tenement house on 100th between Amsterdam and Columbus Ave.

Our neighborhood consisted of mostly Puerto Rican families and street gangs. Having come from war-torn Belgium, life in New York was a challenge.

My father was Orthodox and my mother was liberal. He ensured that I was immediately enrolled into a yeshiva to learn about Judaism and religion.

Yeshivas Or Torah (Manhattan Day School) was no more than seven or eight blocks from my house. To get to my school everyday I had to walk through a Puerto Rican block and cross a black ghetto. Between 1948 and 1955 was when the city planned on tearing down the old tenement housing to build new projects.

We moved many times from Midtown to Uptown locations in Manhattan which was another hardship and challenge, taking me away from the Jewish friends I already had.

I had to learn two new languages: Hebrew and English, which came rather quickly to me in order to adapt to Judaism and the neighborhood environment. I also studied the Chumash (Bible) and the Pirke Avot (Ethics of our Fathers).

Ultimately, my mother started her own artificial flower shop on 100th Street and soon opened up a shop near Macy’s at Herald Square.

She had all of the necessary tools and dyes – no hired help – and started from scratch making petals and gorgeous flower arrangements for formal gowns.

My father found a job in a furrier shop and sewed fur tails for fur coats for formal wear. They were both seriously ill, having suffered during the war. In 1957, when I was 15, my mother passed away. Three years later, just after I graduated high school, my father passed away.

In 1984, while I worked as a civilian for the U.S. Navy hospital in Philadelphia, I was blessed to adopt my son, Aaron.

As a family advocacy representative, I was approached by the duty officer of the day who told me that a mother in the delivery room was relinquishing her baby for adoption.

On orders from my wife, Ellen, I took immediate action. I met with the hospital commander and informed her that I was interested in this baby.

Connections between a Navy hospital JAG officer and a civilian attorney led to final adoption after nine months of personal baby care and home studies. This was a Mitzvah and a gift from God.

For many years, I had often wondered whether I could ever get in touch with the Detry family, who saved my life. I decided to write to the mayor of Lalouviere.

He received my letter and passed it on to the veterans’ administration, which eventually found the Detry family.

In 1986, while stationed as a civilian with the U.S. Army near Dusseldorf, Germany, I decided to visit Lalouviere with my wife and 2-year-old son to locate this wonderful family that saved my life.

I had an address but failed to locate the family. Having a phone number in hand, I called Madame Detry from a phone booth.

Her initial response was, “Dede, is that you?” recalling the nickname the family gave me.

I wanted to get together. After a few moments she came to pick us up at the booth and took us to her home for a three-day reunion.

This Madame Detry was the sister of the woman who took me in, who had passed away many years earlier.

We talked in French about the war, about me, about my family and about my son. She shared pictures of me, ensuring me that this was indeed the family that hid me. She was delighted that I had a son and had adopted him.

During my visit, I met Jean Marie after so many years. We talked for hours about everything in French and a little bit in English.

I have since maintained contact with Jean Marie and asked him to provide me with more information about my hiding with his family so I can write my autobiography.

I have many questions: How long was I in hiding? What was it like for me on a day-to-day basis? How long did I stay? Was I baptized?

He referred these questions to his aunt who promised that she will eventually answer.

For many years, I never really spoke openly in public about my background.

“Their experience left them with a complex psychosocial and theological legacy.”

It was not until I returned from a 17-year tour in Germany and Holland with the Army that I became interested in sharing my story with people and groups.

I do not at all feel lucky that I survived the war. I feel that I have lived and experienced a unique episode in my life that has given me the need to talk about my background and to help families with their hardships.

As a current social worker and outreach program manager for mental health in the U.S. Air Force at Wright-Patterson A.F.B., and over the many years of military service, I have been involved in many complex family situations and have assisted as many military families as I could.

I feel that I have done my best in attaining their desired and required needs for a better life.

There is no more story.

Memorial on a global stage 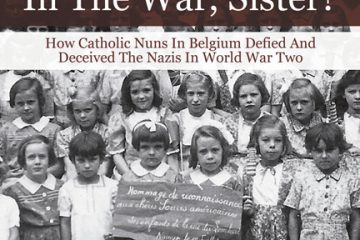