In the realm of halacha (Jewish law) and morality, there are those who compare the act of accepting refugees to the mitzvah of redeeming captives — pidyon sh’vuyim. In contrast to the aphorism that “one shouldn’t negotiate with kidnappers,” halacha actually requires (in most cases) that Jewish communities pay any reasonable ransom to ensure the freeing of a captive.

When he wrote on the topic in Hilchot Matanot Aniyim (Laws About Giving To Poor People) of his Mishneh Torah (8:10), Maimonides expressed his view not only that “redeeming captives takes precedence over feeding and clothing the poor,” but, more so, that “there is no commandment as great as redeeming captives, for a captive is among the hungry, thirsty, naked, and is in mortal danger.”

In this passage, he goes on to explain that whosoever “averts one eye” from redeeming a captive violates at least the following commandments:

Suffice it to say, Maimonides considered this obligation of unusually high import.

The comparison of pidyon sh’vuyim to the acceptance of refugees seems, to me, apt. If we extend to all people the labels neighbor and brother, then each of these biblical commandments applies to people who seek asylum.

Beyond this, Jews throughout history have known that paying ransom for captives can come with some real, material drawbacks. And yet, the halachic conclusion is that there are some risks we simply must take.

So too should it be with accepting refugees at our southern border. Certainly, there are risks involved. And yet, our moral obligation remains.

We might draw some further wisdom from Rabbi Lord Jonathan Sacks, chief rabbi of the United Kingdom from 1991 to 2013. Opining on the effect of the Syrian refugee crisis on Europe, he wrote: “I used to think that the most important line in the Bible was ‘Love your neighbor as yourself.’ Then I realized that it is easy to love your neighbor because he or she is usually quite like yourself. What is hard is to love the stranger, one whose color, culture or creed is different from yours. That is why the command, ‘Love the stranger because you were once strangers,’ resonates so often throughout the Bible. It is summoning us now.”

Sacks’ sentiment is remarkably insightful. If there is anything that Jewish morality makes perfectly clear, it is that we have an obligation to care for those who are in need, such as the poor, the sick, and the orphan. And in contemporary society, few people are as much in need as refugees.

There has been ample documentation (including by the Office of the Inspector General of the Department of Homeland Security) clarifying that our nation’s Customs and Border Protection agency has been enforcing policies that have caused atrocities to take place: children being separated from their parents; children being forced to live in conditions that, quite literally, would be criminal if imposed on animals; and adults being physically abused, psychologically tormented, and made to endure legal malfeasances.

All of these are things that our nation doesn’t impose even on lawbreakers. To think that refugees suffer them — in our name, in the name of every citizen of the United States, in the name of all American Jews — is a shanda, a disgrace.

Alas, this shanda is a reality. Because the United States is a representative democracy, the mistreatment of migrants at our country’s southern border, a group that includes refugees, does take place in our names.

That is a major problem, and we each should be doing everything in our power to fight against it.

We should spread the word about the issue to those we know, particularly sharing how we experience it as those connected to the Jewish community, with our unique history and culture; we should be donating to organizations such as the ACLU or KIND (Kids in Need of Defense) that combat the detainment camps and work to protect migrants; and, of course, we should be contacting our federal elected representatives (Sen. Sherrod Brown at 202-224-2315, Sen. Rob Portman at 202-224-3353, and Rep. Michael Turner at 202-225-6465).

As I have reflected on this topic in recent weeks, I have considered how throughout my life, I have had a fluctuating position on history’s bystanders.

At times, I have felt that while such people obviously weren’t moral examples, it might only be through the convenient lens of hindsight that someone like me can judge them for their inaction. Perhaps, I have sometimes thought, it could be that evidence of injustice only becomes fully apparent in retrospect.

Today my thinking couldn’t be any more different. Here and now, the injustice is already quite clear and our tradition calls upon us to act: we cannot be bystanders.

As members of a people of chronic refugees, perpetually seeking new homes as strangers in new lands, we must identify with refugees, we mustn’t let atrocities take place in our names, and we must push back and speak out.

We shouldn’t require the lens of hindsight to see that.

A heritage of chosenness 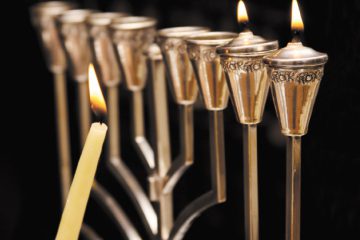