In the American Jewish Committee’s briefing before Dayton Mayor Nan Whaley chaired a delegation of four U.S. mayors to Israel in May, AJC’s Melanie Maron Pell told the participants, “If you don’t come home more confused, then we have failed you.”

Whaley, who chairs the U.S. Conference of Mayors International Affairs Committee, returned from the May 5-12 trip with the observation that Israel’s situation is “not so much complex as it’s hard. The decisions are hard decisions and there are so many things to focus on.”

“Project Interchange is an institute of the AJC to send thought leaders, influential leaders from around the world, in small delegations to Israel for an on-the-ground, firsthand experience,” Pell said.

The project, she added, tries to show the leaders a wide range of viewpoints and expressions of what it means to know Israel, from high-tech to education to culture.

“It’s not just about the conflict which Israel is surrounded by, but that’s certainly an important element of it.”

Whaley said she is impressed with Israelis’ impatience to get things done.

“There’s a great urgency with Israelis that I really like,” she said. “I like Israelis because they’re as direct as me. So we have great conversations.”

One of Whaley’s direct conversations was with Amb. David Roet, head of North American Affairs for Israel’s Foreign Ministry, who joined the mayors at a dinner in Jerusalem.

“I have some things to say to the Israeli government because I do think that — we (the mayors) were all Democrats — we worry about losing the left. I think we should have a Jewish homeland, I think Israel should be its own state. But they (Israel) are losing the left. And I think the government (of Israel) has done some bad choices to make that happen and I don’t think they really understand that.”

As an example, Whaley said she told Roet that if the American Israel Public Affairs Committee had hosted the trip, she would not have attended.

“It’s perceived in the progressive community as a right-wing organization right now,” Whaley said of AIPAC. “He was pretty horrified by that, and I said, ‘Well think about it. Your prime minister gets involved in our elections before the election and hugs Donald Trump.’ I said, ‘Regular people in Ohio that are not in the Jewish community, they don’t understand Israel or even where Israel is.’”

Whaley said that the American Jewish community has a role to play in making sure support for Israel doesn’t become a strictly Republican issue.

“I feel like 20 years ago, Israel was a bipartisan issue,” she said. “I worry that — it’s not there yet — it could become a partisan issue. And I think the American Jewish community should pay very close attention to make sure that it doesn’t. I really pushed on the ambassador. ‘I’m horrified you’re saying this,’ he said. Be horrified, but you need to pay attention.”

Whaley also told the ambassador for North American Affairs that when Israel bombed Syria in May, nobody in Dayton paid any mind outside of the Jewish community.

“Unless you’re in the Jewish community, no one has any idea that’s going on,” she said to Roet, “so when you have something in the news in America and your prime minister is coming to attack a sitting president or your prime minister is having a meeting with the Republican candidate for president, that’s what they (Daytonians) see, and then it becomes partisan. You want people to understand the nuance, and that is not how our political system is right now. Our political system, if anything, is not set up for complicated.”

The way Israel is handling its politics in the United States, Whaley told Roet, “is Donald Trump and evangelicals. We’re (the left) going to be very nervous about that.”

That this delegation of mayors comprised only Democrats, AJC’s Pell said, was not intentional.

“AJC is strictly non-partisan and we always try to put together bipartisan delegations,” she explained via email. “We invited a good number of Republican mayors (and other Democratic mayors) but these were the four that could make this set of dates work. Our last delegation, for example, was chaired by a Republican (John Giles of Mesa) and had three Republicans and five Democrats.”

Whaley saw for herself how much Israelis love U.S. Pres. Donald Trump, and she said she understands why.

“We were in Sderot, right on the border (with Gaza). Then we got some street food for lunch. We asked the street vendor, ‘What do you think of Trump?’ ‘He’s amazing. He has cojones the size of ostriches.’ I understand the passion around the Iran deal. I get that.”

Over dinner in Holon (one of Dayton’s Sister Cities), the head of Holon’s Sister Cities project told Whaley, “Look, I’m (on the) left. I can’t stand Bibi (Netanyahu), I don’t like him at all, but Obama was no good for us on these issues. And I know Trump’s a weirdo, but at least he’s doing what we need in our interests.”

“The conversations were so rich,” she said.

At the border with Gaza, Whaley and the other mayors received a briefing from IDF Brig. Gen. (Ret.) Nitzan Nuriel, now a research fellow with the International Institute for Counter-Terrorism at the Interdisciplinary Center in Herzliya. Originally, they were to hold the briefing at Israel’s border with Syria, but Iranian troops in Syria had fired missiles into Israel early that morning.

“The general said, ‘Israel is not the main course here. Israel is a side dish. The main course is Iran versus Saudi Arabia.’ I would not have known that had I not gone there.”

She also learned about the Boycott, Divestment, and Sanctions movement on the trip.

“I had no idea this BDS stuff was happening,” Whaley said. “And it’s happening in (American) councils and cities. I had to be completely educated on that. But they’re watching it at AJC every single day. And it’s all coming from the left.”

This was Whaley’s second trip to Israel, her first as mayor. She and AJC’s Pell hope to expand this project with U.S. mayors. 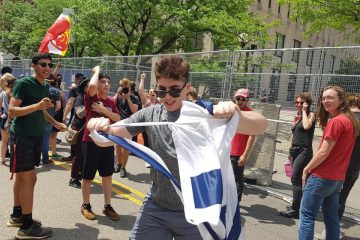 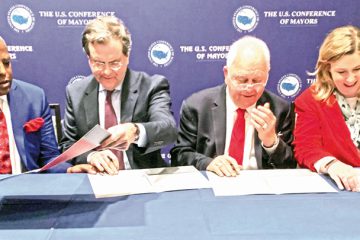