A study last year at a Jewish overnight camp serving the region concluded that its campers are far more glad than frustrated to be disconnected from their smartphones while there. This summer, the study will expand to several Jewish overnight camps across America, to yield broader and deeper data.

Mercier’s 2017 study findings in this new research field — the consequences of and potential solutions for smartphone addiction — are centered around the 62 campers ages 12 to 15 in Camp Livingston’s first four-week summer session last year.

The campers said that being disconnected from their smartphones “allows them to get to know people at a far deeper level, to fully engage in new and fun activities, to escape ‘drama,’ to connect with nature and their surroundings, and to sleep better.”

In the study, he also noted that many campers discussed the experience of face-to-face communication as though it were a novel experience that they were encountering for the first time.

“The big concern was, are they conscious of the fact that smartphones are causing them problems before they come to camp? Is there a level of awareness? Because in the national conversation, the adults talk about this as if the kids are totally unaware that there’s a problem,” Mercier said. “We explored this issue, and they know it is.”

To arrive at that conclusion, Mercier asked the youths how camp would have been different if they had been allowed to bring their smartphones.

Mercier concludes that the campers are able to express those observations because that’s what it’s like when they’re home with their smartphones.

“What they’re basically admitting is, they are not engaging in life fully because of those phones,” Mercier said. “The more research I do, I’m finding they know there’s a problem. We shouldn’t be talking down to them or keeping them out of the conversation. The national conversation is about imposing limits on their screen time. And part of my point is that we also have to do the complement to that, which is to cultivate within them the ability to independently self-limit the screen time. 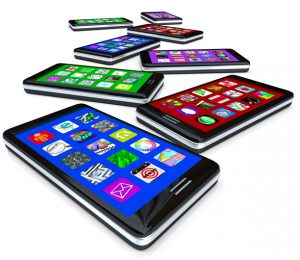 “The research from Camp Livingston especially shows that they’re mentally prepared for that. They have a level of awareness of the problem, and a desire that if we started to help them limit their screen time, a certain percentage of kids would be responsive to that.”

The study found that 92 percent of Livingston campers experienced gladness and 41 percent felt frustration at having no smartphone access at camp.

While there was an overlap of conflicting emotions, Mercier said the study found that 58 percent of campers experienced no frustration and 8 percent experienced no gladness without their smartphones.

Twenty percent of campers self-identified as “addicted” to their phones.

The main frustrations that came out of smartphone deprivation at camp, Mercier noted in his study, were feeling disconnected from family, close friends, and the world.

Camp Livingston Executive Director Max Yamson said the phone-free policy has become the standard for traditional overnight summer camps in North America, and that parents on the whole have come to accept this approach.

“We feel confident that providing a tech-free atmosphere is a benefit for them,” said Yamson, who joined Camp Livingston in September.

Yamson added that he was fascinated to absorb the study’s data on campers’ desires and attempts to limit their smartphone use.

Campers indicated that prior to the camp session, 42 percent had desired, attempted, and succeeded in curbing their smartphone use.

Broadening the data
“When I saw the study come out two months ago that Livingston did last summer, I was really intrigued by it, in view of this research showing not only that camp provides a refuge from smartphones, but it then has mental health benefits through the camp,” JCCA’s Sperling said.

“If camp is a whole new place where kids are getting a refuge from their smartphones, then it can actually position camp as something that is needed and not just a want,” she added.

Sperling contacted Mercier and Yamson to conduct a larger-scale study this summer with as many Jewish overnight camps in North America as possible to broaden the data.

She’s inviting all 25 overnight camps in the JCCA network, along with Jewish overnight camps where she knows the directors, and the camps affiliated with the JCamp 180 program of the Harold Grinspoon Foundation.

“We already have eight camps that have approached us about becoming involved,” Sperling said. “I’m hoping there will be a group of 10 to 15 camps or more that will participate in the survey.”

This summer’s study will allow Mercier to conduct deeper research that he wasn’t able to achieve at Livingston in 2017.

Livingston campers in session one and session two answered written questions at the end of their first and second weeks there.

Mercier also had session one campers engage in small focus-group discussions with their counselors at the end of the third week, to reflect on what it was like to have no smartphones.

Session two at Livingston did not include guided self-reflection. Campers in both sessions were asked to complete a follow-up online survey in November and December.

“What we wanted to study in comparing the two groups,” Mercier said, “was whether elaborating and reflecting on that experience deepens their understanding and gives them a good motivation to cut their screen time after they went home.”

Finding the value of structured discussions
The follow-up survey response from session two was too low for him to use. “We just focused on the qualitative data we had from group one.”

Sperling said she hopes this summer’s data will help determine whether there is value in camp directors facilitating discussions with campers about the smartphone-free experience or if campers internalize the difference at the same level without structured talks.

“I’m visiting 17 camps this summer and as I’ve been scheduling visits, I’ve been asking if they’re interested in doing a focus group,” Sperling said.

She’ll start her camp visits at Livingston with Mercier and Yamson.

“A lot of the credit goes to Max and Aaron (Slovin) before him, and the whole Livingston team for doing this first, before really understanding how important this research is,” Sperling said. “Had they not done this with Michael, we might not have ever thought of this.”

All the camps Sperling works with have no-cellphone policies. Of those, only a few allow campers to bring an MP3 player or radio for activities and music.

“There still will be parents who send their kids with multiple phones so when one gets taken, they have another one,” she said. “It’s really counterintuitive to these kids to develop independence and to learn how to solve their own problems.”

Some parents, she said, worry they won’t be able to reach their children if there’s a crisis at camp, such as a tornado.

“What the camps try to articulate to the parents is that camp would communicate immediately with parents if there was an issue,” Sperling said. “For the most part, parents get it.”