By Scott Halasz
Special To The Observer

They often crossed paths at social and religious functions around town.

But now my Dad, Jerry, and Debbie DiSalvo will be forever entwined thanks to her selfless act.

On July 27, Debbie donated a kidney to my 73-year-old father. At the University of Cincinnati Medical Center, they became a part of each other.

Dad was in kidney failure and on dialysis three times a week while searching for a donor for several years.

I was not a candidate because of neck and back issues. My brother, Mike, was also disqualified because of pinched nerves and disc issues in his neck. Another would-be donor was found to have kidney stones late in the evaluation process.

Debbie told me she saw the posts Mike and I put on Facebook urging potential donors to come forward.

When Debbie realized she and Dad had the same blood type, she immediately volunteered.

Dad was thrilled and dumbfounded at the same time.

“My first thought was Debbie has saved my life,” he told me. “How do you repay someone for saving your life? My thinking was, ‘Why is she doing this? We’re not close friends. Now all of the sudden she’s going to go under the knife for me.’”

For Debbie, it was personal.

“This really stems from not being able to help my own father,” Debbie, 57, said. “Being that my father was on dialysis, I’m a little bit supersensitive to someone else’s father being on dialysis and needing a kidney. The doctors said at the time he was not a candidate for a transplant even though my sister and I begged him. I always kind of promised myself back then that if I could ever help somebody, I would.”

Debbie also embraced her religion while making this life-changing decision.

“What is center at our religion? Life,” she said. “My Judaism is (also) why I did this. That had everything to do with it.”

She was released from the hospital around noon the day after surgery. Dad went home two days later. The recovery has gone as planned for both. Debbie, a teacher at Spinning Hills Middle School, was ready for the start of the school year with few restrictions and plenty of help from co-workers.

Dad and the new organ are getting along quite well. His kidney function levels are normal for the first time in years.

“I’m ever grateful,” he said. “Every day I thank God for Debbie. I received a gift of life.”

Both encourage others to step up and be donors.

“I truly believe that if you’re blessed to be healthy like I am, then you should consider donation,” said Debbie, who has been on the national bone marrow transplant list for many years.

She had absolutely no trepidation in giving up a kidney.

“My mind was made up when I got tested,” she said. “I would have never even allowed the blood work if my mind wasn’t even made up.”

Dad said being a donor ties into his religious beliefs.

“God believes in life,” he said. “(He) doesn’t believe in taking a life. Since we believe strongly in God and l’chayim, to life, it’s important that we fulfill that commandment. If you are a healthy person…if you’re able to donate an organ, especially a kidney, you should get tested and get on a list and let people know you are willing to donate…to save a life.”

Debbie’s generosity has already sparked another potential donation. She said a man at her spin gym has been in touch with the UC transplant team.

“I was hoping this would motivate other people,” she said.

Scott Halasz is a staff writer for the Xenia Daily Gazette and Greene County News.

Their blood cries out 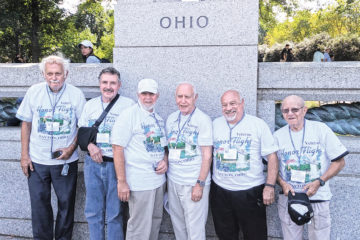