As I write this article I am looking at pictures of my three children. Emma, who will turn 15 in a week. Coby, who starts middle school next month. And Nadia who will be a kindergartner at school’s start.

I also have just watched videos of children in Israel racing to bomb shelters, and the Paris streets littered with violence and I try to imagine what those parents must be feeling right now.

War has engulfed Israel; Europe has erupted in antisemitism, and as a Jew here in the United States I am feeling alone and literally thousands of miles away from my fellow Jews and their children.

All I can say is that there has been for most of the summer a nagging feeling of disharmony and discomfort.

An undercurrent of vulnerability, and although my Facebook news feed is full of positivity for Israel, I can’t help but feel exposed and uncertain — and vulnerable.

Feelings of vulnerability are a common denominator for many of us, yet are very difficult to process and even more difficult to share with others.

I am a big fan of author Brene Brown. She is a researcher who is probably most famous for her TEDtalk on wholeheartedness that has more than 15 million views.

Now a few years ago, Brene Brown was happily doing research on human behavior, specifically on connection, because as she puts it, “Connection is why we are here, it is what gives purpose and a sense of wellbeing.”

Brene Brown found that those who can connect have a sense of self-worth and that sense of “being enough,” allows them to lean into the messiness of life, to become vulnerable.

While vulnerability can seem to be about shame, fear, and our struggle for worthiness, it is also “the birthplace of joy, creativity, longing and love.”

Pretty much all of the emotions come from a place of vulnerability: feeling happy risks the possibility of disappointment, loving opens us to rejection.

Brene Brown is a research scientist. She operated under the motto, “What you can’t measure does not exist.”

Her goal was to tidy up the messy nature of human relations. She thought the way to live was “to control and predict.” Vulnerability? She hated even the word let alone what it demanded.

What happened next? She had, as she puts it, “a little breakdown.” As a scientist and a self-confessed perfectionist, vulnerable was the last thing she wanted to be.

It took about a year for her to regain her equilibrium. She says it was like a street fight between her and vulnerability. She lost, but won her life back.

From that “broken, broken open” place, she reoriented her work to study vulnerability.

She discovered many things, but perhaps the most profound was her examination of vulnerability.

She asked her subjects to complete the sentence, “Vulnerability is….” Think for a moment: what would you say? These are just a few of the responses she received:

Vulnerability is about courage, authenticity and faith. Being vulnerable is being real, showing up, living your truth. It’s also about reciprocity.

A story is told — It is the mid-20th century. A child of immigrants makes good, moves to the suburbs and joins the temple.

It’s newly built, a beautiful synagogue, designed by none other than Frank Lloyd Wright. It’s a far cry from his parents’ synagogue in the old neighborhood or the shul in Pinsk, Poland where they came from.

The Yamim Noraim, the Days of Awe, approach and he thinks, “Wouldn’t it be nice if we could all be together for the Holy Days?”

But his parents seem less than enthusiastic; they like their shul, their rabbi, and all their friends will be there.

Undaunted, he decides he’ll take them for a visit. Once they see how beautiful the temple is, they’ll surely change their minds and want to come.

So the next Sunday, he picks them up from the old neighborhood and takes them to the temple. He shows them the beautiful sanctuary, modern aron hakodesh (holy ark), the stained glass.

There are many “oohs and aahs,” but he senses that something is wrong and so he asks, “Nu, what do you think?” This was their response: “It is lovely son, but can we cry here?”

Vulnerability is essential to the act of prayer itself.

Rabbi David Hartman, of righteous memory, one of the great Jewish thinkers of our time and a family friend, wrote, “A longing to pray, which is in itself, recognition that we are not self-sufficient, that we need help, is an act of prayer. Before we can pray we have to believe that we have a need to acknowledge our vulnerability.”

To pray, to feel God’s presence, to transcend ourselves in any way, there needs to be an opening.

Another Jewish sage, Leonard Cohen, sings: “There is a crack in everything; that’s how the light gets in.”

The Kotzker Rebbe once asked his followers, “Where is God?” They were dumbfounded. “Rebbe, you taught us ‘God was everywhere!’” “No,” he responded. “Only where you let God in.”

Admitting our vulnerability, learning to live with uncertainty, risk and emotional exposure is letting God in.

It is also key to a meaningful life. Why? Because as Brene Brown writes in her book Daring Greatly, that’s how we connect to others and connecting to others is what makes life worth living.

Vulnerability happens in relationships. In fact, it defines our deeper, more meaningful connections with other people. And by doing this we can feel whole and not alone in our truest of selves.

In a few weeks we will be gathering in temples and synagogues all across Dayton. It will be the High Holy Days and the gates to God will be open to us all.

God can hold all of who we are and will embrace us. Embrace our doubts and fears, our anxieties and challenges, our discomforts, our weaknesses and especially our vulnerable cores.

The Baal Shem Tov also known as the Besht told a story: As the Holy Days were approaching, he held auditions for who would have the honor of blowing the shofar. It was a big deal to blow the shofar for the congregation of the Besht and many people tried out and some were very good.

Finally, the last man approached the bima (stage); he was shaking before he even reached the first step and he collapsed into a puddle of tears before he could get through even half the shofar calls.

He felt like such a failure and was about to slink away when the Besht said, “You shall blow the shofar for us this Rosh Hashanah.” The man was stunned. “Why me?” he asked.

The Besht answered him with a parable:

“There is a King who lives in a palace. The palace has many chambers all of which are locked. The King resides in the innermost chamber.”

The King of course is God, but how do we get access? How can we break through?

According to the Besht, an open, vulnerable heart acts like an ax and brings us right into the Holy of Holies, whether it be in relationship to God or to those created in God’s image, you and me.

And vulnerability is also the core of our spirituality. Two generations ago, Rabbi Abraham Joshua Heschel came up with the idea of radical amazement, the feeling one gets when he stands in awe of the natural world.

Standing before a mountain or a vast expanse of water is powerful, precisely because it makes us feel so small and human.

In feeling this awe, Heschel teaches, we feel God. Those who reject weakness, who refuse to feel small, may miss significant experiences with the divine.

If we can in this new year embrace our vulnerability perhaps we can come closer not only to God but to the people we love.

Perhaps we can take more risks with our hearts and open them wider to those most important to us.

Perhaps we can live more deeply and compassionately. Be more engaged with others and ourselves and live the words of our Hineni prayer:

That through our fears and affliction we find joy, life, and peace;

May truth and peace be precious to us;

Blessed are you God who hears our prayers. 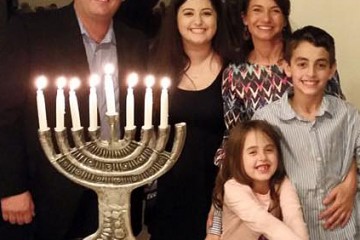 We carry all we have let into our hearts