Between idealism and realism

Strange thing about Franklin Roosevelt’s role in saving — or failing even to try to save — potential victims of the Holocaust: books on the subject paint him as either a hero or a villain. Yet most readers seem to have the impression that FDR was something in between. That, at least, is what I have found about readers.

Perhaps we shouldn’t be surprised. After all, any time a controversial book comes out, it gets publicly challenged in various ways.

Now comes along a book that argues for a middling judgment of FDR, but also serves another purpose.

FDR and the Jews is by Allan Lichtman, a specialist in American politics, and Richard Breitman, a specialist in the Third Reich. Both are at American University in Washington, D.C. (Disclaimer: Lichtman is also the co-creator of a system for predicting the outcomes of U.S. presidential elections, a system which I wrote about glowingly for 25 years at the Dayton Daily News and wrote a book about.)

The book is — perhaps most importantly at this point — a case study in the tension between idealism and realism in government and politics.

This is what Lichtman calls an “academic” book. It is not for those looking for a quick, breezy or even emotional read. But the effort has payoffs.

Already in its third printing, FDR and the Jews has not come in for much written denunciation. Perhaps that’s an indication that readers are predisposed to accept its middle ground. What criticism has arisen, according to Lichtman in an interview, has come exclusively from those who think it is too soft on FDR, rather than too hard.

That won’t surprise many readers. The authors do say that during two long periods — the early 1930s and the early 1940s, basically — FDR was determined to stay away from Jewish international issues. In his first term as president, he wanted to focus on domestic affairs, having been confronted with an economic crisis from which he felt he could not be diverted; he could not spend any political capital elsewhere. And in his third term, just before the war and early in the war, the effort to defeat Hitler as quickly as possible had to take precedence over saving immediately endangered Jews.

This analysis doesn’t come across so much as criticism of FDR as explanation.

Meanwhile, the book holds that in FDR’s second and fourth terms, roughly speaking, he was a good and reasonably effective friend of the Jews, frequently praised to the skies by Jewish leaders. For example, the authors give FDR credit for energetic efforts to get pre-war Jewish refugees from Hitler settled in countries around the world.

Therein lies the story of the St. Louis, the ship immortalized by the 1976 movie Voyage of the Damned. In 1939, the ship was taking almost a thousand refugees to Cuba. But Cuba rejected them. Although the movie paints the voyage as a cruel Nazi joke, Cuba had, under American pressure, accepted previous refugees. And the St. Louis passengers had been told they were accepted. Cuba simply reneged.

FDR wasn’t willing to flout American immigration quotas to accept the St. Louis passengers and risk the reduction of those quotas to zero by Congress, where anti-immigrant and antisemitic sentiments were widespread. But his people did successfully work to get the refugees accepted by various countries in Europe, an outcome the passengers actually preferred to Cuba. And, contrary to the sense one gets from various tellings, this did not entail sending the refugees back to the Holocaust, which didn’t start for another two years. Unfortunately, though, more than 200 of the passengers did end up dying in the war years.

The number of people who might have been helped by FDR’s particular efforts was often small by Holocaust standards. An example is the Auschwitz story. One often hears that if only the Allies had bombed that death camp, great numbers of lives could have been saved. But the authors say that only after mid-1944 did the Allies have bombers close enough to do that.

FDR himself never seems to have been confronted with the possibility of bombing Auschwitz. And Jewish leaders were not pushing for it, perhaps, Lichtman says, because they could not unite behind the idea of killing many Jews. Bombing the railroad tracks to Auschwitz had little appeal, because tracks could be repaired in a day.

An FDR appointee did bring the bombing possibility to the military. The military responded that it needed to stay focused on winning the war. That’s difficult to understand, given that Allied bombers did come very close to Auschwitz, anyway. But the authors note that the Nazis had many ways to kill people and were obsessively determined, Auschwitz or no Auschwitz.

The authors note that the potential bombing of Auschwitz only became a controversy decades after the war.

They give FDR credit for saving perhaps 100,000 Hungarian Jews near the end of the war and for other meaningful efforts during the war.

They paint a portrait of a man who, despite his antisemitic tendencies in conversation, saw the moral issues at stake in pre-war Germany and in the Holocaust and was appalled: not blasé, and not uninformed. But he had to balance competing concerns. That balancing act, skillful and devious, is the main attraction here.

The art of theft 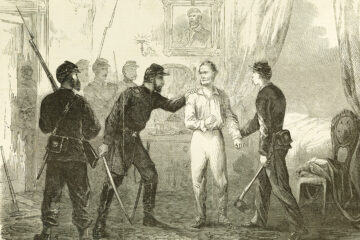