For interfaith families, Pesach and Easter a balancing act

By Sean Savage, JNS.org For a growing number of Jewish families, Passover has become not only a holiday that retells the age-old story of the Exodus from Egypt, but also a time of current conflict and compromise. According to the Pew Research Center’s A Portrait of Jewish Americans survey that

With Rachel Haug Gilbert, The Dayton Jewish Observer Hillel Academy will honor Sandy Sloane Brenner for her 43 years of teaching at the Jewish day school with a brunch on May 31 at Beth Abraham Synagogue. Proceeds will benefit Hillel Academy. Ann Berger is coordinating chefs for the Fifth Annual

The Jewish Internet with Mark Mietkewicz, Special To The Dayton Jewish Observer Passover is quickly approaching and that means pretty soon you’ll be reaching into a familiar drawer to pull out a stack of well-worn and slightly wine-stained Haggadahs. Nothing will ever replace those Haggadahs and their special memories. But

Leshon Ima, Mother Tongue with Dr. Rachel Zohar Dulin, Special To The Dayton Jewish Observer If it’s April, we can’t forget that taxes are due soon. Never mind that we are entering the time of sfirat haomer, the counting of days between Pesach and Shavuot. For many of us, counting

Jerald “Jerry” Mayerson, 85, a longtime resident of Dayton, passed away on March 6 in Boca Raton, surrounded by his loving family. Mr. Mayerson was born in Dayton on Sept. 3, 1929. He attended The Ohio State University, where he was a member of Sigma Alpha Mu fraternity. He served 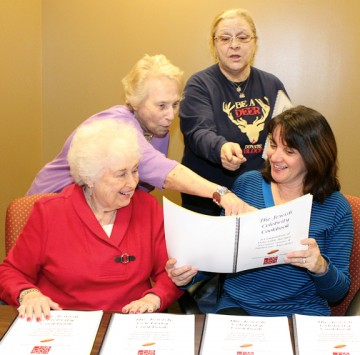 By Marshall Weiss, The Dayton Jewish Observer It would be a challenge to find a Hadassah chapter in the United States that hasn’t put out a cookbook. But the Dayton Chapter of Hadassah’s new offering isn’t just any cookbook: it features recipes and recollections from Jewish celebrities and politicians —

Morris Zrihen to oversee meal for local women’s Seder By Masada Siegel, Special To The Dayton Jewish Observer Following your passion can be daunting, especially when you’ve spent years studying engineering and your gut tells you to become a chef. Morris Zrihen followed his feelings and it led him on

Boston College Film Studies Prof. Dr. John Michalczyk will present a screening and discussion of his PBS documentary The Shadow of the Reich: Nazi Medicine for the first community seminar of Wright State University’s Medicine and the Holocaust course. The community is invited to attend the public program, to be

By Rabbi Shmuel Klatzkin, Chabad of Greater Dayton I grew up in a home where the politics was middle-of-the-road, Cold War-consensus Republican. When, as a high-schooler, caught up in the growing disenchantment with the war in Vietnam, my politics veered wildly leftward, it led to some high-heat political debates at home.