Lisa Michaels, who has volunteered with Ohio’s Hospice for several years, tells us that its Pathways of Hope Grief Counseling Center needs male volunteers in particular for its Camp Pathways program for children and teens ages 7 to 17 who have experienced the death of a loved one. Volunteers ages 18+ are needed to help support them during camp, June 24-26 at Camp Joy Outdoor Education Center in Warren County. Volunteers are asked to complete applications and submit references by Friday, April 29. Lisa says this will be her fourth year volunteering for the camp. “I have the honor of being a group leader for our littlest campers this year,” she says. “Being a buddy the last few years has been one of the most rewarding experiences.” Applications are available at hospiceofdayton.org/volunteers-needed-camp-pathways-2022.

University of Dayton English Prof. Miriamne Krummel’s new book, The Medieval Postcolonial Jew, In and Out of Time, has just been published by University of Michigan Press. In it, she confronts the “fraught temporal dissonances” written into the structure of sacred Jewish and Christian time. This is Miriamne’s third book about Jews in the medieval era. 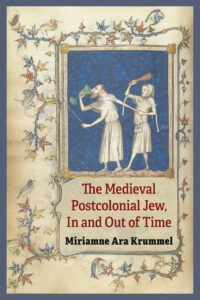 Hadassah Magazine’s latest issue, which celebrates the centennial of the bat mitzvah, includes a reflection from Holocaust survivor and former Daytonian Cherie Rosenstein, who now lives in Beachwood. Cherie wrote about preparations for her adult bat mitzvah, held March 12 at B’nai Jeshurun in Pepper Pike.

Moviegoers who attended the premiere of As They Made Us at The Neon on April 9 were thrilled to have a surprise Zoom visit from its writer and director, Mayim Bialik, and script supervisor Jessica Wasserlauf after the screening. Jessica, who is based in Pittsburgh, has plenty of family in Dayton who attended the premiere. As They Made Us marks Mayim’s debut film as writer and director.

It’s time to send in college and grad school graduation announcements. Send these and all of your Mazel Tov announcements to jewishobserver@jfgd.net.

Brunch discussion on Americanism in Jewish Dayton a century ago