In the April issue of The Observer, we interviewed Centerville resident Maryna Braginsky, who shared what her immediate family in Ukraine endured over the first weeks of Russia’s invasion. Her mother was sheltering in the basement of her house in Sumy, a city in northeastern Ukraine. Braginsky’s 11-year-old niece Polina was sheltering there too.

Braginsky’s younger brother, Vlad, an officer in the Ukrainian army, is stationed at Mykolaiv, a city near the Black Sea in southern Ukraine near Odessa. Her older brother, Igor, was fighting with Ukraine’s territorial defense to protect Sumy, the family’s hometown. Braginsky provided us with another update on April 19. This interview has been edited for length and clarity.

What’s going on with your family in Ukraine?
We managed to get our niece (Polina, 11) out of Ukraine, out of Suma, and taken to France. She went through Poland and then she stayed with friends of friends in Germany for one week. And then we managed to get her to France, to my husband’s distant relative.

How did you get her out?
It wasn’t a green corridor. It was some police team. They agreed to take her and her mom across regions and then they managed to get transportation from there and into the Polish border. And her mom returned. And we’re trying to figure out what to do with her next.

My older brother (Igor), who is this girl’s father, he was in territorial defense in the same city because his daughter was there. But as soon as we got her out, he re-enlisted in the regular army and he asked to be transferred south, where our younger brother (Vlad) is. So now he is there. My younger brother is still in Mykolaiv. It’s bad there. But my older brother, he’s in the Mykolaiv region but he’s not exactly in Mykolaiv.

Is your mother still in her house in Suma?
She is, yes. And she refuses to leave, unfortunately. I don’t know if she can leave by now or not because last night, they (Russians) started the great battle for the east, which involves Donetsk and Lugansk and Kharkiv, and Kharkiv is like 70 miles from my mom’s city. So if they decide to go there, anywhere they go it’s another butcher. I don’t know.

We talk to her, but she decided she does not want to go anywhere. She wants to stay in her own house. I don’t know what made her make the decision. Probably because both (of my) brothers are fighting and this is the only normalcy left in her life now, she’s in her own house. That’s why she doesn’t want to go anywhere because if she evacuates, I think for her it means that the whole life is destroyed.

How does your mother get food, water, and medicine?
She has her own water well. Food, my sister-in-law helps a lot because she’s in charge of the grocery store. That’s why she stayed back, because that’s the only grocery store for the huge neighborhood, so she said, “I have to go back and take care of the store so people can at least buy something that’s rationed.” At least she manages to get some bread there and some milk there.

So medicine, sometimes the Red Cross manages to come and then my mom gets her meds. She has meds for thyroid, and she just survived cancer, so she needs some support from medicine. Sometimes my brother’s friends manage to get some medicine and then they just come, fighters, and just bring her something.

There are a lot of mines left from when Russians retreated. They left mines along the road, in forests, in fields. So now (Ukrainian) authorities tell people not to go anywhere, just stay in your own street, stay in your own yards because everything is full of explosives. Now, my mom says, “I hear a lot of explosions.” It’s because probably our guys are detonating those explosives in fields.

This huge battle in the east, they say they have around 40,000 Russian troops there, is spilling over to south. Honestly, yesterday was very hard and today is very hard because I constantly try to check on my brothers. And one (the younger) is in a special division, so he doesn’t answer me. I see that he is online, he’s using his phone, but he doesn’t answer me.

So I asked our older brother what’s going on. He said he’s fine, he’s just really busy so he doesn’t answer. But I want him to answer, at least a smiley face that everything is OK, at least something to know that he is using his phone now and that he’s still fine. 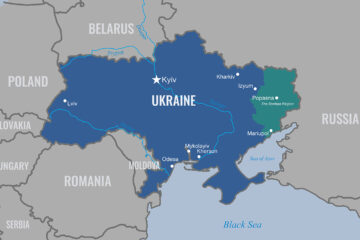