What follows are comments offered on Shabbat Vaetchanan (Deut. 3:23-7:11), learned and inspired by the writing of Rabbi Adin Steinsaltz, may the memory of this righteous one be a blessing.

Those who have read the Tanakh/Jewish Bible know that much of scriptural narrative deals with our ancestors’ ongoing love/hate relationship with idolatry — how they would be unfaithful to their covenant with God, slide into worshipping the images of the gods of their neighbors, repent and pledge renewed faithfulness, backslide, repent again, etc.

This susceptibility was apparent even before they entered the Promised Land: there was the incident of the Golden Calf and the episode of being seduced by the Moabites and worshipping their god, Baal Peor.

Consequently, much of the Book of Deuteronomy, Moses’ last will and testament, constantly warns the people of the dangers of idolatry and how to avoid it.

But what exactly is idolatry? Why is the Torah so concerned about it? Why does it caution us against it, and what is the source of its attraction?

Contrary to conventional wisdom, idolatry is less about the objects of a person’s devotion and more about the person’s intention: what a person makes ultimately important in his or her life.

From this perspective, it is easy to understand that idolatry can manifest itself in different ways. Idolatry has always been associated with venerating images of Zeus, Aphrodite, or Baal.

But if idolatry really is about making anything else besides God of ultimate importance, then whatever we devote all our energies, time, resources to — a career, a car, a political cause, etc. — we can also make into idols.

In our time, it has been argued that, like our ancestors, there are still Jews who are “idolators” in that they separate and isolate one aspect from the totality of the Jewish commitment to God.

Examples of such people include, but are not limited to:

• Those who focus their Jewish commitment solely on working for Israel.

• Those who focus their Jewish commitment solely on promoting social justice.

• Those whose passion for Shabbat inspires them to throw rocks at other less-observant Jews.

• Those who pray to only one “part” of God, for example, the Shechinah — understood by the mystics to be the “female aspect” of Divinity — thus compromising or even denying the unity of God affirmed in the Shema.

In discussing this phenomenon, the late Rabbi Adin Steinsaltz pointed out that the urge toward idolatry actually is rooted in a religious inclination, the desire to wholly devote one’s self to something.

This may happen when a person is faced with many disparate, perhaps contradictory elements in his or her quest for meaning. Each element may point in a different direction, like fingers on an open hand.

The contradictions may lead to confusion, even anxiety, and cause the person to choose one of those elements and elevate it, in order to clarify or simplify his or her religious commitment.

The focus of devotion may itself not be bad or forbidden. It may even be something quite noble and sacred such as Israel, social justice, Shabbat.

But when it is disconnected and isolated from its original total context, its connection to authentic sanctity is lost.

Thus, the true challenge of resisting idolatry in its many forms is overcoming the allure of oversimplifying one’s devotion.

For example, there are those who aver that all religions can be reduced to “love”— love of God and love of one’s neighbor.

Now, of course Judaism is all for loving God and loving our neighbors. But Judaism is more complex than “love.” We are commanded to love God and love our neighbor, but we are taught about the need to hate: “Those who love God hate evil (Psalm 97:10).”

When it comes to “the other,” we are commanded to love the stranger in our midst, but not to fraternize too much with those outside of the community, lest we follow in their ways.

Which of these is important? Both! But many folks can’t deal with both. They want and expect either/or and may tend to separate and isolate one element of religious commitment to the exclusion of the others.

This is how the Torah — and all religious belief, for that matter — morphs into idolatry.

There is an old Yiddish saying, “Schwer zu sein a Yid, It’s hard to be a Jew.” One of the reasons it’s hard is because living as a Jew means being able to navigate the complexity of living with opposites:

• Celebrating freedom from slavery at Passover, mourning the tragedy of the Holocaust a mere five days later on Yom Hashoah, and a week later once again celebrating the miracle of a Jewish state reborn on Yom Ha’atzmaut.

• Resonating with the solemnity of Yom Kippur and then rejoicing five days later on Sukkot.

• Fully understanding that the words “A time for love and a time for hate, a time for war and a time for peace” are not just the lyrics of a well-known song. Instead, they accurately reflect what life is about, and that there is a proper time for each.

As Rabbi Steinsaltz reminds us, it’s hard to be a Jew because it requires us to be extreme and moderate, instructs us when to be quiet (Yom Kippur) and when to be wild (Purim).

Judaism teaches us to accept this and that, even when we prefer to accept either this or that.

The latter leads down the path of divisive idolatry.

The former affirms the unity of life, and thus the unity/uniqueness of life’s Creator: 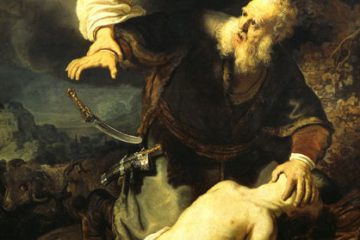