Sex trafficking and exiting prostitution have been longstanding concerns for American Israeli author and social justice activist Talia Carner. She addresses it directly in her new novel, The Third Daughter.

Carner first encountered the topic in 1995 when she attended the fourth World Conference on Women, in Beijing.

At the conference, Carner, who was then on the business side of magazine publishing as the publisher of Savvy Magazine, gave entrepreneurial workshops on economic self-reliance for women.

She recalled how the conference changed her views on freedom from violence.

“I knew about sexual violence and rape as a tool of war,” Carner said. “But I then learned about genital mutilation in Africa and the Middle East, the burning of brides in India over family and dowry disputes, and the sexual enslavement of women. The height of sexual violence against women is sex trafficking, something I depict in my latest novel.”

Carner noted that two-thirds of prostitutes in the United States are lured from other countries by false promises of jobs. Once they cross the border, their passports are taken away and they are effectively enslaved.

Most of these women don’t know the language. They have an innate distrust of law enforcement, which is often corrupt in their countries, and they are not aware of their legal rights.

The other third of prostitutes are American girls. Carner said that most of these girls are between the ages of 12 and 14.

The Third Daughter is a realistic, timeless depiction of how young women are trapped into prostitution.

Taking place in late 19th-century Buenos Aires, the novel is set in a little-known period of Jewish history when poor girls from Eastern Europe went to Argentina holding on to a false promise of advantageous marriages. 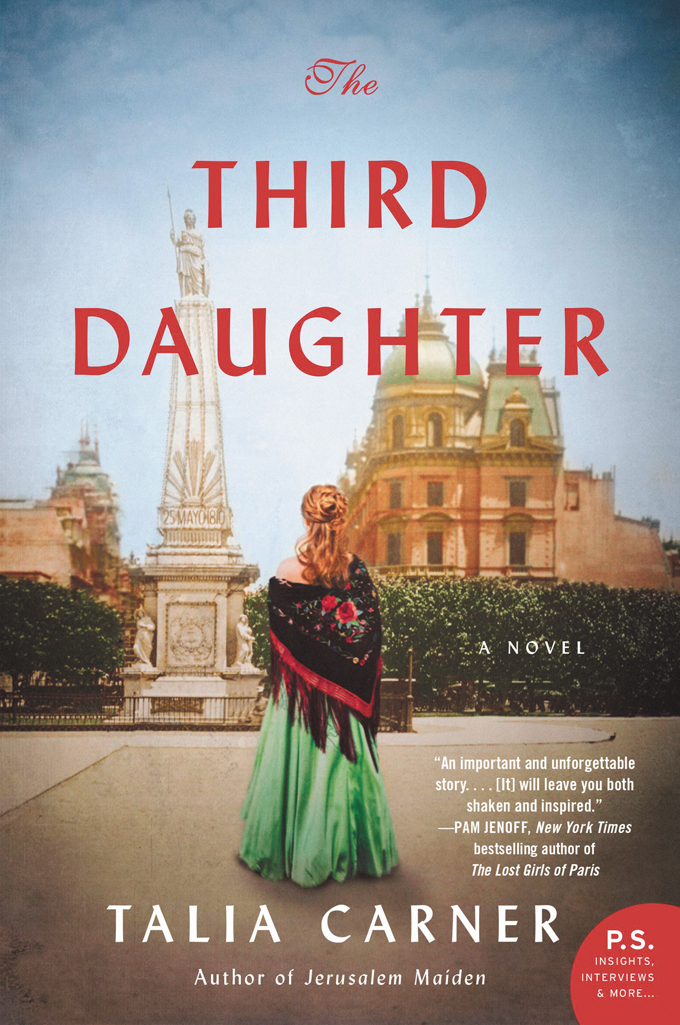 Carner, the author of previous novels that have also concentrated on women’s issues, learned about this shameful episode when she came across a Sholem Aleichem story called The Man from Buenos Aires.

She was fascinated that Aleichem wrote about a character that she described as “creepy and sleazy.” She read several translations of the story in Hebrew to get to the essence of the culture and speech.

“I channeled Sholem Aleichem as I was writing (The Third Daughter),” she said. “Tevye’s banter with God was so interesting that I incorporated that voice in my work,” she added, referring to Aleichem’s most popular short stories, involving Tevye the dairyman and his daughters.

Carner tells the story of Batya, a 14-year-old girl whose parents accept the marriage proposal of a much older, seemingly wealthy man on her behalf.

Unbeknownst to them, they deliver their daughter into a life of prostitution. Carner’s research uncovered that these girls were raped and tortured on ships from Russia to South America.

To give her story verisimilitude, she learned more details, from the street names in the Argentinian capital from 120 years ago to how women in a brothel in Buenos Aires dressed and ate to how a Jewish union of pimps operated with impunity in South America from 1870 to 1939.

“The rest was completely my imagination,” Carner said. “All I needed to know was that Batya was tortured, raped, caged, and starved on the ship, and I imagined myself there. There were no diaries found by these women. There were no firsthand accounts.”

Carner asserted that fictionalizing these women’s stories enabled her “to bring out their humanity.”

She noted that these women, pariahs in the Jewish communities where they worked, were considered “impure” and shunned.

They were denied Jewish burials or entry to synagogues. Yet as Carner pointed out, many of them still retained their faith in God and “wanted to meet their creator as pure.”

They took it upon themselves to wash the bodies of their sister prostitutes ritually in preparation for burial.

“Many of the prostitutes believed that a dead person carried prayers and good wishes to someone’s relatives already in the next world,” she said.

As for breaking the ongoing cycle of prostitution in the 21st century, Carner believes it starts with education and exposure. “We need to reveal men like Jeffrey Epstein,” she said. “People knew about his crimes a decade ago.”

According to Carner, businesses such as airlines, hotels, and credit card companies are “doing something important to change society’s focus from the victims — the prostitutes — to the victimizers, the men who pay for sex.

Besides these men’s vulnerability to public exposure, it’s the demand side that drives the business.”

She further noted that it is paramount to understand that these women do not benefit directly.

“Rather, it’s a third party that reaps the financial benefit,” she said. “By understanding the humanity of these women — and viewing them as exploited victims — the demand can be lowered.”