While their parents may have relied on tape recorders and CDs for their own B’nai Mitzvah preparations, students today learning to chant Torah can turn to YouTube.

“There are lots of cantors who have produced high-quality recordings on YouTube,” said Ben Rotenberg, education director at Germantown Jewish Centre in Philadelphia. “It’s easy to find a voice that you can match and feel comfortable with.”

The video sharing website is just one of many technologies being incorporated into B’nai Mitzvah preparations.

For Gen Z kids in the tween and teenage brackets, technology plays a key role in entertainment, education, and socializing.

Naturally, they also rely on apps and websites as they prepare for their coming-of-age ceremonies.

Parents, educators and event planners are also using these resources to make preparations go smoothly. Rotenberg has incorporated technology into his own tutoring work.

“I’ve done some B’nai Mitzvah tutoring long distance for students using Skype and FaceTime, and I would send them feedback through Google Docs,” he said.

His students have also used Trope Trainer, software that offers full Torah portion readings users can access on their phones and other devices. It offers the full text of the Torah, along with Haftarah (Prophets) and audio recordings for blessings.

The comprehensive TropeTrainer mobile app costs $24.99, and the entire software package can cost more than $100.

“We want to help younger people overcome the sense of distance they may feel toward the text,” said Sara Wolkenfeld, director of education at Sefaria. “For the teen and tween age, when there’s a lot of pressure about the B’nai Mitzvah, it makes it less intimidating to know this information is just a click away.”

According to Wolkenfeld, the first results for internet searches for English translations of the Talmud used to be antisemitic websites. Sefaria’s co-founders, Google alum Brett Lockspeiser and bestselling author Joshua Foer, set out to change that.

Now, anyone with an internet connection can access their library of texts and commentary.

This includes students preparing for their B’nai Mitzvah. Sefaria users can use the site or app to find their assigned Torah portions in Hebrew and in English, choose their favorite layouts, add and remove vowels, create lists of helpful sources, consult a visual map of connections between texts, and research commentary for inspiration for their D’var Torah speeches.

“Text provides a starting point for a lot of people. They want to know, ‘Does Judaism have anything to teach me about gun violence? Food justice? Homelessness?’ They can use Sefaria to search for these themes and be connected with relevant texts and commentaries,” Wolkenfeld said. “People should be connected to the richness of literary tradition, and Sefaria is designed to show users that all of these texts are in conversation with each other.”

Wolkenfeld’s son, Noam, is a proficient Sefaria user who celebrated his own Bar Mitzvah early this year.

“He has very strong interests, so Sefaria was useful for clicking through text and searching across themes,” Wolkenfeld explained. “We also had a student whose whole family used Sefaria so everyone could speak on texts during the Bat Mitzvah ceremony.”

Of course, the party following the ceremony also takes a lot of preparation. Stephanie Fitzpatrick, talent director and emcee at the event planning company EBE Talent, uses Google Drive and Skype to communicate with clients.

“A lot of families are opting for meeting via FaceTime and Skype — people have busy schedules, and that’s been very popular,” she said. “And Google Drive has been a great way to update people in real time and keep them in the loop.”

Fitzpatrick has worked at EBE Talent for 10 years and observed the rise of technology in the party planning process. In addition to organizational tools like FaceTime and Google Drive, the company uses various apps and software for guests’ entertainment.

According to Fitzpatrick, gone are the days of being confined to a photo booth for party snapshots. PartyPrint is a software and app that allows people to take pictures with their phones and send it to a printer so they can pick them up and take them home easily.

“If a guest uploads a picture on Instagram or Twitter with an event hashtag, we can pull them directly from the web and create a real-time slide show of the event,” Fitzpatrick explained. “This is controlled by a real person, which is useful for filtering out any inappropriate photos from kids.”

Changes in technology have also had a profound impact on party music selection. People use Spotify and Apple Music to create playlists for their events, and while you might still hear some classics like Y.M.C.A., Fitzpatrick has noticed an increased demand for songs from TikTok stars.

These internet artists are popular among kids who use the video-based social media platform regularly, but less well-known to the general public.

“DJs have to do a lot of research because these songs are not trending on charts, but all the kids know them and it’s part of their social life,” she said.

And don’t forget about the party favors.

“Some people think this technology is great, others can be overwhelmed,” Fitzpatrick said. “Everyone’s different. But overall, we do see more and more families embracing it.”

A blessing for B’nai Mitzvah impacted by the coronavirus 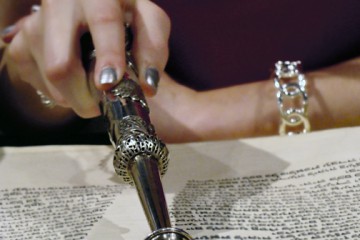