By Rena Neiger, Special To The Dayton Jewish Observer

“It is not good for a person to be alone” is the first statement in the Torah about human nature, Beth Abraham Synagogue’s Rabbi Joshua Ginsberg says.

“The Kabalah teaches that two parts of the wedding couple are plag neshamata, or half-souls, until they join in life partnership under the chupah (wedding canopy) and become one soul in two bodies,” he says. “Hence, the bride circles the groom seven times, the number for wholeness which can only be achieved together.”

Even so, he says, Genesis gives a deceptively simple prescription for marriage: “Therefore a man will leave his father and mother and cling to his wife.” But it is the clinging to each other that is the hard work, Ginsberg adds.

The Observer asked Dayton-area rabbis to share words of wisdom they offer to engaged couples.

“A relationship is bashert, or meant to be, not only because you deeply love each other and delight in the privilege of giving to each other, but because you’re prepared to do the work of being married,” he says. “That includes listening, supporting and caring for each other with the humor and flexibility to appreciate and respect each other’s differences and individuality. It is important, therefore, that you and your partner be loving friends, or rayim ahuvim, a phrase found in the seven wedding blessings (sheva brachot).

“Passion fades, but friendship, if we’re lucky, endures. To have a friend for life, with whom you share the deepest experiences and daily difficulties, is one of the greatest blessings you can ever receive.”

“Love is love is love, and is the backbone of a strong marriage, but it also takes communication and lots of other skills to deal with issues when life becomes stressful,” says Rabbi Karen Bodney-Halasz of Temple Israel.

Inviting couples to meet with her before the big day, Bodney-Halasz covers much ground in multiple sessions that include homework and opportunities to develop their communication skills — together.

Bodney-Halasz believes these meetings help lay groundwork for a good relationship, equipping the couple to deal with problems before they become insurmountable.

She feels a strong sense of duty to counsel young couples on important issues including fertility and children.

“This means genetic testing for Jewish and non-Jewish diseases,” she says. “Our meetings are an opportunity for them to engage seriously with each other and to recognize that we’re invested in them as a couple, not just as individuals. I also ask them how we, the congregation, can support them, and what kinds of traditions they want to include in their wedding. It is important for them to feel that the community is celebrating with them.”

Likewise, Rabbi Judy Chessin of Temple Beth Or invites couples to a series of counseling sessions to plan the ceremony, but also to shed light on issues the couple will grapple with, including family conflict, origins, and cultural differences.

Chessin strives to include the couple’s parents, but a wedding can be the first “stepping out” point.

“I spend a lot of time explaining that this is their life and they must make decisions for themselves,” Chessin says. “Often, what parents want or expect for their children isn’t what the children themselves want. Our meetings are often a jumping off point. Although it’s a ceremony and shouldn’t be a paradigm for life, it often is. Yes, it’s about the color of the flowers but also about the bigger issues like where will we live? Will we buy a house? How much will it cost? How many children do you want? Do you want a pet? How much input will our parents have in the choices we’re going to make?”

Couples must also figure out who they are going to be together religiously, Chessin says.

“I do a lot of interfaith marriages, but with the understanding that it is going to be a Jewish, not a Jewish-Christian wedding. Often, it is the Jewish partner who doesn’t understand the pervasiveness of Judaism and how it will impact specifics they haven’t yet considered until our conversations.

“I give couples a wonderful list from a book of questions that one should ask before marriage. It includes all kinds of categories ranging from economics, lifestyle and habits: the kind of things couples don’t always know about one another. I encourage them to read and talk together and then come to me to discuss. The more they talk about expectations before the wedding, the better. We also go over Jewish aspects of the ceremony and they decide what parts they want to incorporate. A Reform ceremony isn’t necessarily according to strict halacha (Jewish law). I let them make their own choices. The ceremony often expresses what their Jewish life together will look like in their own home.”

Chabad’s Rabbi Nochum Mangel says his advice to the betrothed starts with the Hebrew words for man and woman.

When these two letters are removed, it leaves only the aleph and shin remaining to form the word aish, the Hebrew word for fire.

“Fire,” Mangel says, “has both positive and negative components. It can consume and destroy but can also cook and provide warmth. So how do we ensure that this fire doesn’t consume? We must add the yud and the hey, which together comprise the word (for) Hashem (God).”

A marriage, Mangel says, needs Hashem at its core to provide a strong union and a higher purpose. If marriage is a godly commitment and a way to pass on Jewish tradition through the home and family, the result is a stronger relationship and a successful marriage.

“The answer is right there in the Hebrew words,” he says. “We wish for a new couple to create an everlasting Jewish home by keeping God as the partner at the center, and as the starting point for addressing conflict.”

Mangel explains to couples that the chupah, with its absence of walls, represents the patriarch Abraham’s tent, with hospitality at its core.

The Jewish home should be open to others. Thus, marriage is not only for the couple’s personal benefit, but is also the foundation from which the family operates to do for others and to make a difference in the world.

“Two people come together, share their strengths, and then share them with others,” he says. “A marriage is much more than companionship, convenience, or two salaries. Rather, it combines what is best of the male and female, and together they form an edifice representing God.”

He says that a Jewish home should contain three elements: Torah for the soul, and bread and salt to sustain the couple and community.

The rabbis recall particularly memorable weddings, whether because of their magical settings, or as Bodney-Halasz says, when heirloom rings were exchanged under the chupah, with the couple relating the rings’ origins from close family members who were no longer alive. The guests were moved to tears.

Sometimes, Chessin says, it’s the bloopers that stick in the mind. She remembers the moment when the glass didn’t break under a groom’s foot, instead flying out and hitting a musician.

Ginsberg says the moment that remains etched in his mind is his own wedding, when his wife came down the aisle.

“I was standing in front of the chupah in a kittel (ceremonial white robe). Four cantorial colleagues were angelically singing a version of Ani L’Dodi v’Dodi Li (I am my beloved’s and my beloved is mine) as a beautiful figure in white came toward me. She stopped before me and slowly began to circle me four times and then I circled her three times (a variation on the bride circling seven times). We turned around together to begin the ceremony. This was the first of our shared Shehecheyanu moments — moments of holiness and gratitude — that we will hopefully cherish together forever.”

He says that the rabbis of the Talmud teach us that making a good marriage is harder than parting the Red Sea. A couple would do well to remember what it says in our daily liturgy: “Who in His goodness renews the acts of creation each and every day.” Ginsberg paraphrases this as, “Each new day offers the opportunity to begin again, find love again, and move forward.”

Related: Bashert in the Bible

The father of Oakwood's library 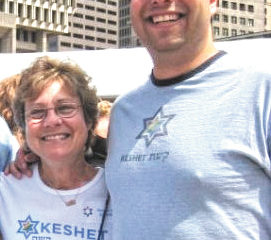