By Rabbi Tina Sobo, Temple Israel
In my pre-rabbi life, I was a competitive swimmer. As I entered Hebrew Union College for rabbinical school, I was coming off 18 years of a life that involved a lot of chlorine.

Unlike many of my soon-to-be colleagues, my resumé was not speckled with anywhere near as many of the usual pre-rabbinate experiences.

In fact, although I was highly involved in the Jewish community, my resumé contained swimming, swimming, and more swimming: accomplishments in the pool, scholar-athlete awards, coaching, lifeguarding, teaching swim lessons, and pool-related certifications.

And of course, Jewish swimming: I had competed with Maccabi USA internationally a few times. Not that it is bad for a rabbi to know CPR and water-safety, but a technically correct butterfly stroke isn’t really the most common prerequisite to the rabbinate.

As an athlete, I have always been intrigued by the intersection of swimming and Judaism, which led me to the discovery of my favorite Talmud passage: the only athletic endeavor we are required to learn: swimming. Kiddushin 29a — which is written as obligating a father to his son, but can be understood in modern times as a parent to a child — states:

“A father is obligated in respect of his son to enter him into the Covenant (Brit Milah), redeem (Pidyon Haben, if applicable), teach him Torah, bring him to the wedding canopy (marriage), and teach him a trade. Some say also, to teach him to swim.”

This list can be viewed as the essential responsibilities a parent is obligated to for their children.

The beginning of the list brings a child into Jewish tradition through ceremonies: Brit Milah, or a parallel ceremony and naming for girls, and Pidyon Haben, the redeeming of the first-born, if applicable. With these ceremonies, parents bring their child into our faith and commit to guiding them on the first part of life’s journey.

Teaching a child Torah, bringing them into a healthy relationship with another human being, and teaching a trade serve the adolescent moving toward the next stage of life.

These help guide a child on the path toward independent and meaningful adulthood. The ability to understand Torah allows an emerging adult to make religious decisions for themselves.

A healthy relationship brings partnership in adult life, and all the benefits thereof. Teaching a trade provides for one’s material needs. But how does swimming come into play?

The sugya (passage) continues over the next couple pages explaining each obligation in more depth. The question is asked of the obligation to teach a child to swim, “What is the reason? — His life may depend on it (Kiddushin 30b).”

And here we have the answer. The ability to swim is seen as a necessary piece of knowledge to make it into adult Jewish life. The assumption of the Talmud seems to be that children and adults encounter bodies of water. They may not have had an eight-lane Olympic-sized swimming pool in mind, but oceans, lakes and rivers, which one may fall into, and which don’t have lifeguards.

The principle, the value, behind this idea is pikuach nefesh, the preservation of life. It is one of the highest obligations in Judaism.

It is so important to save a life, that it is permissible to break Shabbat in order to save another’s life.

It is this same principle that permits those who by reasons of health cannot fast, to eat on Yom Kippur.

It is interesting to return to this passage now, as a parent of a 9-month-old, in terms of raising children.

This passage reminds us, as parents, to remember that our actions are not just about getting through the grocery store without surprise items in the cart or praying during silent prayer that our child understood the word silent, but that every action as a parent contributes toward creating a person capable of a meaningful adult life.

Our specific actions and teachings we impart on children may appear to be as simple as a basic freestyle in the pool, but the impact of those actions, and the values they teach, extend far beyond the backyard pool.

In matters of religion, I love to debate ideals and principles, the reasons and intricacies of practice, matters of theology, and other topics. I love the argumentation model in the Talmud. It is rarer in our times to ask, “But why?” and “What if?” as many times as our tradition does.

This passage reminds us that in the end, it’s not about the volumes of law that we have created, but about life. Our Jewish learning and doing must promote life, meaningful life, even in the seemingly mundane matters. I look forward to seeing you in the synagogue, or perhaps, the pool!

With gratitude toward Donald Trump 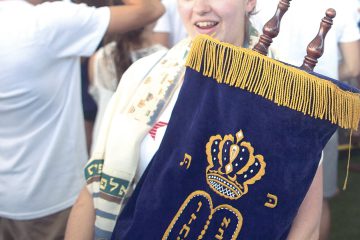