By Michelle Tedford, Special To The Dayton Jewish Observer
Janice Davies-May’s most recent steps on her lifelong spiritual journey were down the hallway at Temple Israel. It was the first Shabbat after her Oct. 19 Bat Mitzvah with the temple’s adult B’nai Mitzvah class.

“When I walked through the temple that evening, I really felt different — I felt like I had come home,” says Davies-May, 79.

She felt it even before she saw her friends waiting for her, before they welcomed her with her first Magen David (Star of David), before she accepted it and cried.

Her fingers reach up to rub the pendant hanging from her gold necklace.

“I probably would have gone years ago if I knew I was going to be accepted,” she says.

Davies-May is one of the Dayton area’s Black Jews who has found community in local synagogues.

While their numbers are small, their presence is a reminder of the diversity found in Judaism. The Observer invited Jews of color to share their stories of faith and life in the Miami Valley.

Public commitment
Davies-May has always been one to read, study, question and learn, she says.

Even as a child in Detroit, she says, she knew her family’s chosen religion, Catholicism, was not right for her.

She began by reading James A. Michener’s The Source, a history of the Jewish people, then over the years adapted her religious observance to conform to Jewish practices, such as a Saturday Sabbath.

She has observed Jewish dietary laws for more than 20 years. With her late husband, she began attending Messianic services, a form of Christianity with Jewish trappings that’s neither accepted in the Jewish community nor by mainstream Christian denominations.

After her retirement from the federal government, Davies-May met Dr. Erika Garfunkel at the University of Dayton’s Osher Lifelong Learning Institute. It was Garfunkel who first invited Davies-May to Temple Israel and, with other women, helped make her feel welcome in Hebrew classes and services.

Davies-May credits the patient teaching of Rabbi David Sofian with the education she received for her conversion.

She became a Jew on Aug. 29, 2011 with her immersion in The Miami Valley Mikvah at Sugar Camp in Oakwood under the supervision of Temple Israel’s Rabbi Karen Bodney-Halasz.

Conversion made her spiritual calling official, but it also filled a void: she was finally a member of a faith community.

While it’s taken her a long time to get here, she hopes her peace and joy serve as examples to her children and grandchildren, whose faces smile out from photographs resting on every surface of her living room furniture. She hopes their paths may someday lead them to the same spiritual place.

“All of my life has quietly been a move toward this,” she says.

And this constant learner still takes new steps, continuing her Hebrew studies to expand her participation in services.

“I’m bound and determined to learn to read Hebrew as well as I read English,” she says.

To the source
Ayanna Williams also came to Judaism by choice. But Judaism was always in her blood.

Sitting in Starbucks on Brown Street, she talks confidently of her childhood days when she would challenge her Catholic grade-school teachers to prove the principles they were teaching. She yearned for source material and felt that Judaism — the religion of her maternal grandmother — provided what she needed.

“I always felt Jewish, even when I was a kid,” she says. “I just technically didn’t go through the steps until I was an adult.”

Helping her on those steps was Johanna Smith, Williams’ neighbor in Yellow Springs. When Williams’ 120-pound dog would escape the yard, she would end up at the Smith house; this gave Williams and Smith opportunities to talk about Judaism.

That was nearly 10 years ago. Today, Williams and her daughter, 16-year-old MacKenzie Rocquemore, are also members of Temple Israel, where Williams teaches students in its religious school.

She says she understands why her grandmother converted the family, given that Jews of color in America face many challenges.

But Williams will challenge you, telling you to look beyond that apparent color line. She is a woman of Jewish Eastern-European, African-American and Native American descent: all of these groups have faced and overcome hardships.

It’s important to pay attention to the source material, she says. It’s a lesson she tells her religious school students, challenging them to not just accept but to question and understand.

She also challenges her fellow members of the Dayton Jewish International Film Fest Committee to diversify the perspectives of the movies they bring to town.

And she’ll tell you that a multiracial, multiethnic woman can thrive in a predominantly white Jewish community.

At times it may be difficult, she says, “but it’s my life: it’s not going to be anything I’m not used to.”

‘First is my faith’
Tall and strong, Renee Peery strikes a commanding figure that’s likely useful in her career as a teacher. But get her to talk about her love of teaching, and she melts.

“When you see in them the values you are trying to teach them, it is rewarding,” says Peery, a longtime Hebrew teacher at Temple Beth Or and a retired education-in-training officer for the Air Force Institute of Technology.

She was raised Orthodox in a Jewish neighborhood in The Bronx inside a big extended family and a supportive, multilingual, multi-ethnic community. “It was more like living in a tribe than living in a city,” says Peery, who remains a member of her family’s Sephardic congregation.

She learned Hebrew by rote, crediting a late growth spurt for her ability to remain in the sanctuary long after other girls were sent off with the women; teaching Hebrew became one of her great joys.

In the Air Force, she found herself stationed around the world — Japan, Korea — yet always able to find a Jewish community.

“In some respects you have to look for them, and sometimes we found each other,” she says.

While based in Dayton, she served as a layleader for an eclectic congregation at Wright-Patterson Air Force Base.

Peery eventually put down roots in Dayton, wanting a stable high school environment for her son, Michael. In the mid-’90s, she received a call from Temple Beth Or looking for a Hebrew teacher. She began teaching Sunday school to third-graders, and now teaches Hebrew to children in grades three through seven.

She mixes time for games into her classes, knowing that the mind needs to stretch and change directions in order to fill and grow. She also encourages her students to ask questions that help them form a picture of their own Jewish identity.

And when they ask about her experiences, she does not waiver.

“First is my faith; everything else follows,” she says. “It’s like the bones inside of me.”

And, as every good teacher, she has another lesson that goes beyond the day’s vocabulary: “You need to love who you are. If you’re going to practice a religion, love it, because you’ll be OK.”

‘My heart’s desire’
Don’t be fooled by 6-year-old Ava Wright’s initial shyness. Give her 15 minutes and she’ll pull out her favorite Chanukah book to read to you.

She sits — and rolls and jumps — on the couch with her parents, Thomas and Corinne, in front of a roaring fire. Ava attends Hillel Academy, Dayton’s Jewish day school, learning there and from her parents the spiritual foundation her parents hope will guide her life.

For Corinne and Thomas, their spiritual search was about finding truth.

“I honestly believe the Torah is the closest we can get to the truth,” says Thomas.

Corinne, a doctoral candidate working in the department of biomedical, industrial and human factors engineering at Wright State University, and Thomas, who owns Wright Real Estate Services, grew up in different Christian denominations.

But even before they met, they knew their spiritual search was not complete. The couple studied, kept the Sabbath and found their faith. But they had not yet found a community.

Corinne described one of the first families they met at Temple Beth Or, which they first attended two years ago. The couple was interfaith, lesbian, with one daughter and a second child on the way. And they were completely integrated into the fabric of the community.

“I remember thinking, this is a sign of how they treat other people,” she says.

On May 14 — Corinne’s birthday and the festival of Shavuot, which celebrates the giving of the Torah at Mt. Sinai to the Jewish people — the Wright family stood on the bima at Temple Beth Or and accepted their Jewish names in a formal conversion ritual.

“I was just trying not to cry,” says Corinne as she talks of the goodwill and good food shared by congregation members at the reception.

While it may be uncommon in Dayton to meet black Jews, the Wrights see the spreading of Abraham’s descendants to “all four corners” of the world as a sign of the accessibility of Judaism to all, whether by lineage or by example.

“Our souls are happy here,” Corinne says. “Judaism is my peace, my rock and my heart’s desire.” 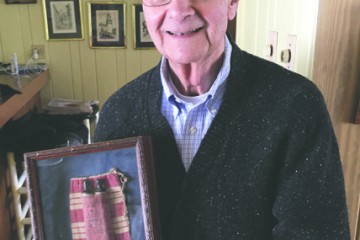