“A person is only forgotten when his or her name is forgotten.” — The Talmud

At the end of World War II, the world and Jews everywhere were stunned when the realization set in that the murder of approximately six million Jews at the hands of the Nazi German criminals was not a fabrication, but a gruesome fact. Research over the years by historians has not altered that figure.

Dr. Wilhelm Hoetti, an Austrian official of the Third Reich, a respected historian, and a high-ranking member of the SS, testified at the Nuremberg Trials under oath of a conversation he had with Adolf Eichmann. Eichmann was responsible for giving orders for the Jewish genocide and shared with Hoetti that four million Jews had died in extermination camps and an additional two million had been shot by Einsatzgruppen (mobile killing squads), or died of disease, malnutrition or torture.

Yad Vashem, Israel’s main research center for the Holocaust, has confirmed these same estimates. Respected historians have also confirmed these numbers as the Nazi German bureaucracy recorded specific details, everything from deportations to the gas chambers.

Jews and others who lost loved ones during the Holocaust are keeping their memories alive in many ways and are remembering them as individuals instead of just one of the six million. Jews miss their loved ones and friends but are unable to memorialize these victims by name and sharing with the world the inhumane details of their deportations and finally their murder. There are no graves, no dates for yahrzeits.

They are just one of a huge number.

In 1992, a German sculptor, Gunter Demnig, had the idea of memorializing all victims of the Nazi regime by creating brass plaques with the individuals’ name, birth date, address where they lived, date of deportation, and place of death. The plaques were to be cemented into the pavement at the address of the victims’ last residence.

He named these plaques Stolpersteine, stumbling stones. In this way, we are reminded of individual human beings and not just a part of a number who were brutally persecuted, deported, and finally murdered. More than 75,000 handmade plaques have been by latest count, installed in 20 countries and in 24 languages. This unique project has become the world’s largest decentralized Holocaust memorial.

After my darling wife, Gertrude, passed away, I had time to think about initiating the process for obtaining permission to memorialize six people in my birth city of Mannheim, Germany who were victims of the Shoah.

I discussed this with my granddaughter, Emily Rapoport, who agreed with me and was a tremendous help in obtaining approval for the six plaques, which were recently installed in the sidewalk at the addresses where these two families had lived. Due to my advanced age, I was unable to travel to the dedications and installation of these plaques. However, I was represented by a good friend of mine who lives near

Mannheim, who read the memorial speeches and prayers I had written for each family.

Two of the plaques are in memory of Selma and Sophie Weil, lovely sisters who had no family, as their parents had passed away. They never married, lived and dressed modestly, and had very little social life. They were brought up with Jewish values and aspirations. Selma was employed at my father’s business as a bookkeeper. Sophie had clients of her own for whom she worked as a tailor. They were almost a part of Joseph and Martha Kahn’s family (my parents). The plaques attest to the torturous paths to their murder.

The other four plaques were for the family Traub, who impacted my early life and that of my sister Irene, as well as hundreds of other young Jewish children. While conducting a kindergarten, they loved me, while teaching me to love every other human being as God commanded us Jews to live by the Ten Commandments. The photographs of the plaques show their deportation and eventual fate.

My granddaughter Emily has started the process of obtaining approval for additional plaques in different cities of Europe to memorialize an additional 18 of my relatives who also became victims of the Shoah.

It is in this fashion that the plaques will memorialize my loved ones and show them as extraordinary individuals who were murdered just because they were Jews. Because I survived their fate, I made an oath that I would devote my life to sharing with the world how and what happened during the Shoah.

I’m still doing so today and urge others to memorialize their loved ones by joining the Stolpersteine project and in this manner honor and pay tribute to those individuals who are typically remembered only as part of the six million. Let this number become individual names of those who perished.

Robert Kahn, 98, was forced by the Nazis as a boy to play the violin on Kristallnacht while they beat his father with clubs, ransacked the family’s apartment, and burned their possessions. He is the author of The Hard Road of Dreams: Remembering Not To Forget. He lives in Kettering. 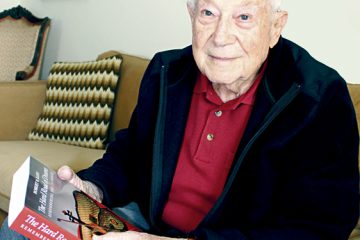