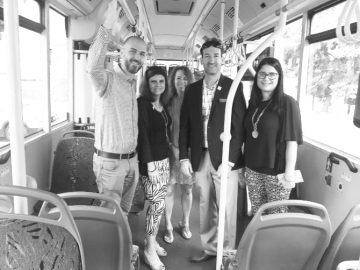 Dayton-based CommuterAds — which has contracts with 13 public transportation authorities across the United States — is now in talks to bring its messaging technologies to Israel’s public transportation sector, thanks to Hadas Bar-Or, trade rep for the Dayton-Israel Regional Trade Alliance. “Andy Schwartz was telling us about this amazing

By Marshall Weiss and Marc Katz, The Dayton Jewish Observer If Dayton’s Lion Group Inc. and Israeli company Artsys360 succeed on an R&D project, fire departments will be able to rely on 3D technology to locate firefighters in burning buildings. Lion and Artsys360 have received a two-year $950,000 grant from the

By Marshall Weiss, The Dayton Jewish Observer Dayton, Montgomery County, and the Dayton Development Coalition have contracted Hadas Bar-Or of Tel Aviv to serve as business development director for the Dayton Region Israel Trade Alliance office. Bar-Or, formerly the trade representative to Israel for Massachusetts, has signed a contract to