Golden and crispy on the outside, juicy on the inside.

By Sonya Sanford, The Nosher

Chicken tabaka is a western Georgian dish where a whole chicken is flattened and pan-fried while being weighed down by another pan or heavy object.

The chicken ends up golden brown and crispy on the outside while staying juicy inside. It is so delicious and simple that it has become wildly popular in homes and restaurants across the Caucasus, Central Asia, and former Soviet countries.

Tabaka (or taphaka) comes from the name for a Georgian frying pan called a tapa, which is traditionally used to make this recipe. You can make chicken tabaka with any heavy-bottomed skillet or cast iron pan, along with something you can weigh the chicken down with, such as a second heavy skillet, a heavy pot or bricks wrapped in foil. 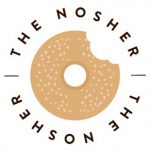 You can also make this recipe on a grill by cooking the chicken directly on the grates while weighing it down. This dish is similar to spatchcocked chicken (where the backbone is removed from the chicken), but for chicken tabaka it is common to flatten the chicken by simply cutting down the center of the breastbone. Flattening and pressing the chicken allows it to cook quickly and evenly while creating the perfect texture and taste.

This rustic and simple dish is often served with garlic sauce or tkemali, a Georgian wild plum sauce.

Chicken tabaka pairs perfectly with fried potatoes or rice, and with a big, simple salad of fresh tomatoes and cucumbers.

I like to serve mine with a Georgian garlic cilantro sauce made in the same pan you cook the chicken in, along with lemon wedges to squeeze on top for an extra pop of flavor.

Note: Make sure to cook the chicken over medium-low heat. If the temperature is too high, the chicken will burn on the outside. This recipe works best with a smaller chicken that is between three to four pounds; if you’re using a larger bird, the cooking time will take longer.

For the garlic sauce:

Slice the chicken down the center of the breastbone using a sharp knife or kitchen shears. Open the chicken and press it down flat, skin-side up. (Note: you can also flatten the chicken using the spatchcock method of cutting out the backbone.)

Cover the chicken with a piece of parchment or plastic wrap, and using a meat mallet or rolling pin, lightly pound on the chicken to flatten it. Season the chicken generously with salt, add the paprika, and rub the salt and spice all over both sides.

Over medium-low heat, add a generous drizzle of oil to a large cast-iron or heavy-bottomed skillet. Once the pan is hot, add the chicken, skin-side up. Place a clean, heavy object on top of the chicken to weigh it down, such as a second cast iron skillet, a sheet pan topped with a large pot, or bricks wrapped in foil.

Let the chicken cook for 25 minutes, maintain a medium-low heat, and occasionally rotate the pan if your burner cooks unevenly. After 25 minutes, flip the chicken so that it is now skin-side down, and cook for an additional 25-30 minutes, or until the juices run clear when pierced, or it reaches an internal temperature of 165 degrees when tested with a meat thermometer.

Once cooked, transfer the chicken to a serving dish and allow it to rest for 15 minutes. While it rests, prepare the garlic sauce.

Over medium heat, add a drizzle of oil to the same pan you cooked the chicken in. Add the minced garlic to the pan, and sauté for two to three minutes, or until the garlic is aromatic but not browned. Add ¾ cup of water, scrape off all the delicious bits in the pan, and allow the mixture to simmer and reduce for another three to four minutes.

Turn off the heat, and add the chopped cilantro. Taste and season with salt and pepper. Spoon the sauce over the chicken just before serving, or serve the sauce on the side.