Sing Along With Tevye

Following the run of Human Race’s Fiddler on the Roof, audience can join in for first-of-kind concert version

When Kevin Moore contacted Music Theatre International with his special request, he was told, “No one’s ever asked us this before.”

Moore, producing artistic director of The Human Race Theatre Company, asked MTI for a special license to perform a concert version and sing-along of Human Race’s production of Fiddler on the Roof to follow its month-long run at The Loft Theatre.

With MTI’s approval and the blessing of Actors’ Equity, Sing-A-Long Fiddler on the Roof Live! will take place on Dec. 1, in partnership with the DJCC’s Cultural Arts and Book Fest.

According to Moore, the idea for the sing-along came from the Jewish Federation’s new CEO, Cathy Gardner.

“Cathy had talked about where she was previously, that they had done a sing-along with the film,” says Moore, who also directed the Human Race production.

“We will do some of the numbers fully, Tradition, Matchmaker, we’ll do the wedding, all of that, and we will project lyrics when it’s appropriate for the audience to sing along,” he says. “I’ll be there to narrate and connect.”

“My first experience with Fiddler was just out of college, at the Westgate Dinner Theatre in Toledo, which was on a postage stamp,” he says. “It was a tiny stage. But I thought it worked well. And then I did a larger production with Kenley and I played Motel against William Conrad. What a dear, dear man. His acting was incredible but it was small because he was geared toward TV and film. So at Memorial Hall, past the first few rows — it was a good performance — but they weren’t seeing the depth that I was seeing onstage with him. And I thought, what a great opportunity to see that in a space like ours.”

At its core, Moore describes the 1964 hit musical as an intimate family story. “I’m trying to figure out how to scale it down a little bit, to make it fit our space but make it stay true to the story.”

His plan is to present the full production without cuts. Moore has combined some parts and doubled up casting on others.

Another way he’s scaling back the production is to adjust the orchestral accompaniment down to four musicians who will appear onstage at points in the production as klezmorim, street musicians.

“We are dealing with the violin, the clarinet, mandolin, and then we have Jay (Instrumental Music Director Jay Brunner), who will alternate between guitar and accordion onstage and then offstage, he’ll probably also have his bass.”

Brunner takes on the role of Nochum the Beggar, who will go around playing music, always with his tin cup.

“I want this to be Fiddler unplugged,” Moore says. “We don’t need to sound like the Broadway orchestra. That’s not what it’s about. Let’s tell our story the way we need to tell it.”

“Chris learned it through people who were there with Jerome Robbins,” Moore adds.

Members of the cast from Dayton’s Jewish community are Saul Caplan as Lazar Wolf, and 11-year-old Hillel Academy student Jordan Vandersluis, who is double cast in the role of Tevye’s youngest daughter, Bielke; she’ll alternate in the role with Hannah Sayer.

The Human Race Theatre Company presents Fiddler on the Roof at The Loft Theatre, 126 N. Main St., Oct. 31-Nov. 30, with Sing-A-Long Fiddler on the Roof Live! on Sunday, Dec. 1, 2 p.m. in partnership with the DJCC’s Cultural Arts & Book Fest. Tickets for Fiddler are available at humanracetheatre.org or at the door. Tickets to the sing-along are $18 and are also available through the DJCC by calling Karen Steiger at 853-0372.

To view the print version of the November 2013 Observer, click here.

How TEDx came to Dayton 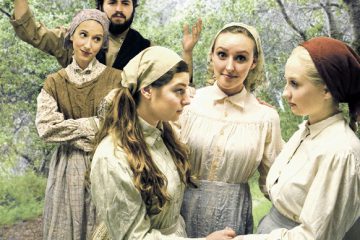 At Wright State, Fiddler becomes a teaching tool, onstage and off

Sing Along With Tevye