Philanthropists Patti and Lee Schear have established a scholarship program to enroll more Jewish high school students at The Miami Valley School, have provided the private, nonsectarian college prep institution with the funding for Jewish studies courses (a component of the school’s new religious studies department), and in a few weeks will open an independent Judaic study program at Sugar Camp available to all ninth- and 10th-grade Jewish students in the Dayton area.

As a mechanism to maintain these three related ventures, the Schears have established Sinai, a non-profit organization.

Five Sinai Scholars are enrolled in Miami Valley’s ninth grade and will take their first Judaic elective during the school’s third trimester. Four are former students at Hillel Academy, Dayton’s Jewish day school, which runs from kindergarten through eighth grade.

According to Lee, he and Patti initiated the Sinai project because of their love of Miami Valley, the need to nurture deeper post-Bar and Bat Mitzvah Judaic education in the Dayton area, and to strengthen Hillel Academy.

“I was so impressed with Libby and Laura’s first year,” Lee says of their daughters, who transferred to Miami Valley’s middle school from Oakwood last year.

The Schears said they recognized the need to make Miami Valley affordable for Jewish students who couldn’t otherwise attend. Combined with the Judaic courses, they hope this will also set Hillel up as a feeder school to Miami Valley, though Sinai scholarships aren’t limited to Hillel graduates.

“All of a sudden, it would be very attractive to keep your kids in (Hillel) through middle school,” Lee said, “because you could get into this new program, where it’s really inexpensive to send your kid on to the best secular education, with Judaics attached. I am sold on the idea that the community really needs a Hillel Academy.”

Miami Valley’s headmaster, Peter Benedict, said that adding a religious studies department at the school — a conversation that began in discussions with members of the Jewish community including the Schears — is aligned with the school’s mission.

Peter said the school looked at college prep schools in the New England area as models for nonsectarian schools with religious studies departments.

“Some of the big, leading independent schools in America have religious studies departments,” he said. “I think that’s a neat thing for MVS.”

The Sinai program will fund all expenses related to the Judaic studies courses, including teachers. Next year, plans call for higher-level Judaic electives for the 10th-grade. As the program expands, the Schears say they’ll look for additional funding. “Five kids is one thing, but 25 is kind of tough,” Lee said. “We plan to broaden the base of support.”

Independent study at Sugar Camp
Sinai Scholars are required to take the Judaic electives each year at Miami Valley and participate in Sinai’s independent study, which will meet during the school year every other Sunday afternoon at Sugar Camp in Oakwood. This, Lee says, is an opportunity for the Sinai Scholars — along with all interested local Jewish ninth- and 10th-grade students — to explore Jewish values at their own pace. The independent study will be held on the ground floor of Building A at Sugar Camp, in what the Schears call the “Sugar Shack.”

“It’s going to be dedicated and used for kids as a place to hang out, with two classrooms,” Lee said. “It’s way overkill for the first year, but I’ve got big dreams and I want to grow into this space.”

The first Sugar Shack session will be held on Sunday, Oct. 18 from 5-6 p.m. with Rabbi Nochum Mangel leading the program.

“The emphasis is on Jewish identity and Jewish values and assisting the kids to get better ideas of both,” Patti said.

Lee added, “I can’t think of anything we can do that would be more worthwhile than this project.” 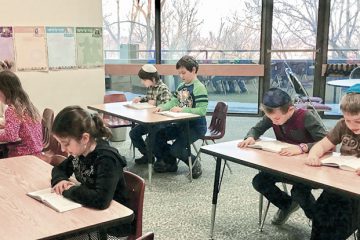