On Friday, May 29 and Saturday, May 30 at 8 p.m., Dayton Playhouse will present Asher’s Command by Marilyn Felt as part of its Flip Side series.

Based on a true story, Asher’s Command takes place in 1988 in the West Bank during the first intifada. Looking back over 18 years, the play focuses on the friendship of an Arab mechanic and a young Israeli soldier, now a general, who has been promoted to the position of commander of the West Bank.

Felt, who died in 2006, also wrote the play Acts of Faith, about an Arab terrorist and his Jewish American captive, which was performed at the Mosaic Theatre in Plantation, Fla. and at the 92nd St. Y in New York in 1987.

As a curriculum developer for Education Development Center in Newton, Mass., Felt coauthored the middle and high school curriculum, Beyond Blame: Reacting to the Terrorist Attack, which EDC published a week after Sept. 11, 2001.

Asher’s Command was Dayton Playhouse’s 1998 Futurefest winner. Is was also performed in 2002 for a Kennedy Center-sponsored production at the J. Howard Wood Theatre in Sanibel, Fla.

For tickets, call Dayton Playhouse at 424-8477 or go to www.daytonplayhouse.org. 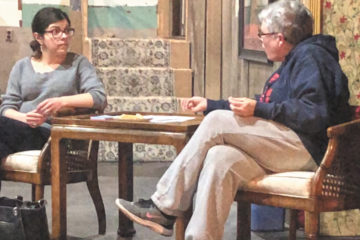